In 2019, Wisconsin was the second-largest producer of fluid milk in the country. According to 2019 data compiled by USDA’s National Agricultural Statistics Service, Wisconsin generated 30,601 million pounds of milk from about 1,267,000 milk cows, with milk sales totaling $5 billion. Dairy production was the single largest agricultural activity in the State in 2019, with an average of 7,720 licensed dairy herds, 96 percent of which were family owned. In recent years, Wisconsin dairy farms have been exposed to substantial weather volatility characterized by frequent droughts, storms, and temperature extremes (both hot and cold). This has resulted in considerable fluctuations in dairy productivity.

Weather volatility affects dairy production in various ways, such as:

To gain a better understanding of climate effects on dairy production, researchers tracked the growth of milk output over time while controlling for inputs such as herd size, labor hours, feed, and capital, at the same time focusing on the characteristics of the production environment, such as rainfall and temperature. The result is annual total factor productivity (TFP), a measure of the rate of growth in total output relative to the rate of growth in total inputs.

Researchers found that, between 1996 and 2012, TFP increased at an average annual rate of 2.16 percent for Wisconsin dairy farms, with considerable variation across individual farms. This productivity increase was primarily driven by technological progress at an annual average rate of 1.9 percent. Technological progress happens when producers introduce new processes and systems in dairy production, such as improved herd genetics, advanced feed formulations, and steady improvements in milking and feed handling equipment among other mechanical advances.

Notwithstanding technological progress, TFP growth was hampered by the negative effects of climate variability. Trends in rainfall and temperature variation were responsible for a 0.32 percent annual decline in the productivity of Wisconsin dairy farms between 1996 and 2012. Put another way, an average increase in temperature of 1.5 degrees Fahrenheit reduced milk output for the average Wisconsin dairy farm by 20.1 metric tons per year. This is equivalent to reducing the herd size of the average farm by 1.6 cows every year. 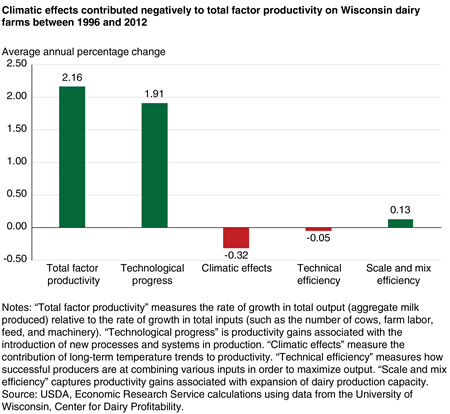