American dairy farms cover a wide range of herd sizes, from 50 cows or fewer, through midsized operations of 300-400 cows, and up to larger operations with several thousand cows. On average, larger farms have lower production costs than smaller farms; the differences are substantial and hold across a wide range of herd sizes. While herd size is not the only factor that matters for production costs, these scale-related cost differences are important. As a result, larger farms are more likely to realize positive net financial returns to milk production, even though their average revenues per hundredweight of milk produced are, on average, somewhat smaller than the revenues of smaller farms.

The evidence for this finding is based on the milk costs and returns estimates produced by USDA’s Economic Research Service (ERS), which are developed from surveys of dairy farms conducted as part of USDA’s annual Agricultural Resource Management Survey (ARMS). ERS and USDA’s National Agricultural Statistics Service (NASS) develop a large and representative sample of dairy farms for a special dairy module of the survey, which is conducted every 5-6 years, most recently in 2016. While the survey covers both conventional and organic operations, cost comparisons in this article focus on conventional operations only.

ERS also reports on gross and net returns for dairy farms. Gross returns include milk sales, plus revenues from the sale of culled dairy animals, milk cooperative dividends, and the fertilizer value of manure. Larger herds generate lower gross returns per hundredweight of milk produced because many are in regions with lower milk prices. Despite realizing lower gross returns, lower costs led to much larger net returns among larger operations than among smaller farms. In 2016, farms with more than 1,000 head realized positive net returns, on average, while gross returns per hundredweight for farms with fewer than 500 head were well below their average costs. 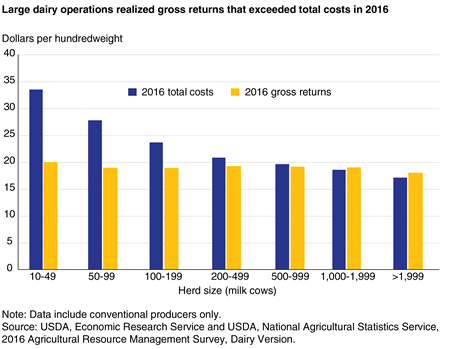 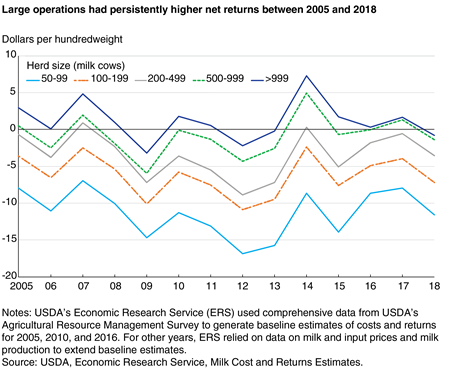 Total costs include cash expenses, such as those for feed, fuel, and hired labor, but they also include estimates of the costs of the farm’s capital and of the family labor provided to the dairy farm. While family laborers are rarely paid a salary that is entered as a cash expense to the farm, ERS estimates what family workers could have earned if employed off the farm and enters that estimate as the opportunity cost of labor to the farm. 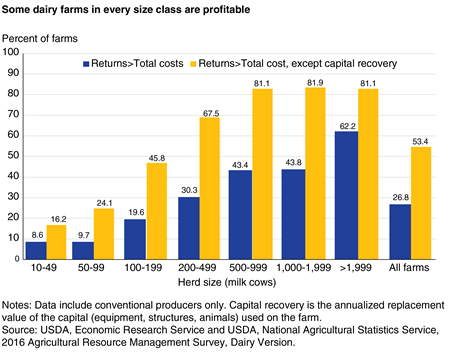 This analysis focused on average total costs and average returns within herd size classes. However, there are substantial differences in performance among farms, and some farms in every herd size class realize positive net returns. For example, even though average net returns for farms with 10-99 cows were strongly negative in 2016, nearly 10 percent of those farms generated positive net returns. And even though farms with at least 2,500 head generated positive net returns on average, nearly half of those farms did not generate positive returns in 2016. While farm size is an important determinant of dairy farms’ costs and returns, it is not the only factor.

What accounts for differences in performance among farms? Some farms can generate higher revenues and may be able to survive even with a small herd. For example, some farms generate additional revenues from developing and selling high-quality breeding stock. Others can create value-added enterprises, such as agritourism or cheese-making, which complement a small dairy business and allow the farm to survive even though the returns from milk production alone do not cover its costs. Finally, some small commercial farms engage in organic milk production; in the 2016 ARMS, organic dairy farms with at least 100 cows generated positive net returns, on average.

Farm production costs may also vary widely, and in some cases may allow smaller operations to be financially viable. Some farms can realize low feed costs through effective management of pasture and forage and access to high-quality feed at attractive prices. Others can manage herds to maintain productive cows for longer, and to consistently deliver high-quality replacement heifers. However, conventional farms that are transitioning to organic production must bear the higher costs of organic without realizing organic prices.

While some small commercial dairy operations are financially viable, the long-term outlook is sobering. On average, cost differences related to herd size are substantial and are likely to remain so. Larger operations, because they generate positive net returns, continue to have strong incentives to expand, and expansion will place downward pressures on milk prices. Many small commercial dairy operations are likely to remain at financial risk,

Small and midsized dairy farms face significant financial challenges. ERS milk costs and returns estimates show that these farms have been earning persistent losses, on average, for many years, while larger farms with lower costs have had persistent financial advantages. As a result, cows and production have been shifting to larger farms. ERS researchers can track this structural change with data from the census of agriculture, which is administered every 5 years by NASS.

In 1997, most milk cows (56.3 percent) were on small commercial dairy farms (10-199 cows), while farms with herds of at least 1,000 cows held just 17.5 percent of all milk cows. Those numbers changed sharply over the next two decades. The number of small commercial dairy farms fell by two-thirds, while their share of all milk cows fell to 21.6 percent. Meanwhile, the number of farms with at least 1,000 cows more than doubled, and those large dairy operations came to hold 55.2 percent of all U.S. cows.

Large dairy farms have also grown. The USDA’s Census of Agriculture reported data only for farms with 1,000 or more cows in 1997. By 2007, the census split that single large class into two, with a threshold of 2,500 cows. The larger class (2,500 cows or more) accounted for most of the growth in farm numbers, cow inventories, and production over 2007-17, and the census consequently split the largest class again in 2017, to a threshold of 5,000 cows. The census reports that there were 189 dairy farms with at least 5,000 cows in 2017. Previous ERS research with census records identified 142 such farms in 2012, 47 in 2002, and 8 in 1992. Today, the very largest U.S. dairy farms milk more than 25,000 cows, and are usually organized in a series of pods, each comprised of cow barns or lots, manure storage units, feed bunkers, and milking facilities.

With cows and production shifting from smaller to larger farms, the number of dairy farms has been in persistent decline for many years. The number of licensed dairy herds has fallen every year since NASS started reporting annual estimates in 2002, at an average rate of more than 4 percent per year. The Census of Agriculture provides a longer view: it shows that there were nearly 200,000 dairy farms with at least 10 cows in 1978, a number that fell to about 150,000 by 1987, to 94,000 in 1997, and to just under 38,000 by 2017 (most farms with fewer than 10 cows do not sell milk). 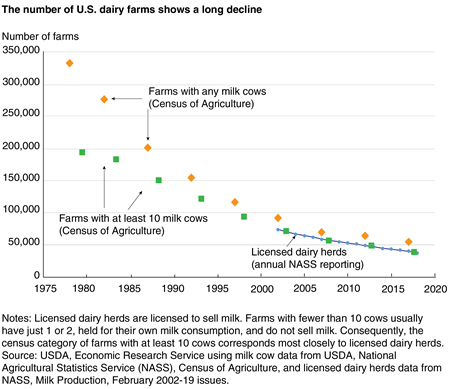 While production has shifted from smaller herds to larger herds throughout the country, most farm closures have occurred in Northeastern and Midwestern dairy States where small and midsize commercial dairy herds have accounted for high shares of production. Four States—Minnesota, New York, Pennsylvania, and Wisconsin—accounted for 60 percent of the country’s 30,373 small commercial dairy farms (10-199 cows) in 2017, and most of the closures during 2007-17 happened in those States. By contrast, the four largest Western milk production States—California, Idaho, New Mexico, and Texas—together accounted for less than 2 percent of all small commercial dairy farms.

The long-term shift toward larger operations reflects persistent cost differences, but also reflects changes in the demand for dairy products. Consumption has shifted away from fluid milk, which is generally shipped relatively short distances for sale, and toward dairy products like cheese, yogurt, and dry milk powder that can be shipped long distances across the country or exported. The shift in the composition of demand makes local production less important and tends to favor farms that are often quite large, in locations far from population centers.

While small commercial farms have been leaving dairy production for many years, the rate of exit can rise in periods of low milk prices. During 2018, milk prices fell, and average net returns to milk production fell to -$3.10 per hundredweight of milk produced from -$0.05 in 2017, according to the ERS milk costs and returns estimates. The number of licensed dairy farms fell by nearly 7 percent in 2018 alone as a wave of farm closures hit many traditional dairy States in the Northeast and Midwest; closures continued into 2019, with the number of licensed dairy herds in Wisconsin falling by 10 percent.

Milk prices recovered in the second half of 2019, with the average price received by farmers rising to $20.70 per hundredweight in December 2019, compared with $16.60 in the previous December. However, small commercial dairy farms continue to face a challenging financial environment. While the rate of dairy farm closures may abate in 2020, it is unlikely to reverse, and we should expect to see a continuing shift of cows and production to larger operations.