Farmers till for many reasons. Tillage prepares the soil for planting, controls weeds, incorporates manure or fertilizer that has been spread on the soil surface, mixes crop residue into the soil, and encourages soil warming for early planting. In recent decades, however, farmers have steadily reduced tillage by limiting the number or intensity of tillage operations or eliminating tillage altogether (no-till).

Recent ERS research shows that many farmers who use no-till (avoiding tillage altogether) or strip-till (tilling only a narrow strip in the rows where the crop will be planted) alternate these practices with full-width tillage. Data from the Agricultural Resources Management Survey on the production practices of corn, cotton, soybean, and wheat producers show that roughly half (51 percent) used either no-till or strip-till at least once over a 4-year period. Twenty-one percent used no-till or strip-till in every year during the same 4-year period. The other half of producers (49 percent) used full width tillage every year.

The consistency of no-till/strip-till use in any given field may depend on the crops that are grown in rotation. For example, corn and soybeans are often grown in rotation, but the likelihood of no-till in soybeans (40 percent in 2012) is higher than the rate of no-till in corn (27 percent in 2016). In many cases, farmers use no-till when growing soybeans but use tillage when growing corn. Topography and soil conditions are also likely determinants. Previous ERS research shows that “highly erodible” land and well-drained land (land that dries out quickly enough to avoid crop damage due to wet conditions) are more likely than other land to be in continuous no-till over time. 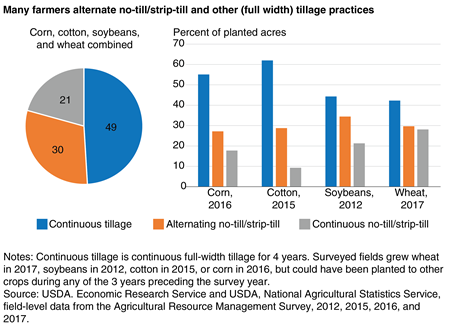