by John Cromartie and Dennis Vilorio 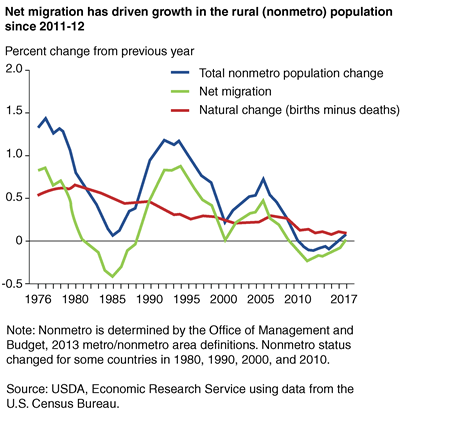 Net migration drives increases in rural population, but not in all areas

The overall rural population has remained close to 46.1 million since 2013. Annual population losses averaged -0.1 percent between 2012-13 and 2015-16, and population gain during 2016-17 was 0.1 percent. However, national population trends mask great variation at the local level. People moving to rural areas tend to persistently favor more densely settled rural areas with attractive scenic qualities, or those near large cities. Fewer are moving to sparsely settled, less scenic, and more remote locations, which compounds economic development challenges in those areas.

Despite increasing net migration generally, many rural counties (42 percent) underwent a decrease in net migration between 2012-13 and 2016-17. These counties were in low-density, remote areas in the Nation’s Heartland, in Appalachia from eastern Kentucky to Maine, and in high-poverty areas in the Southeast and border areas of the Southwest. Some of these areas— including parts of North Dakota, Montana, New Mexico, Texas, and Pennsylvania—have suffered job losses related to oil and gas production. Other regions, most notably eastern Kentucky and West Virginia, have been especially hard hit by the opioid epidemic. The slow rate of overall population change in rural areas since 2012-13 masks significant differences by race and ethnicity. Population gains among Native Americans and Hispanics offset population losses among Whites and Blacks. Whites were the only group showing a significant change in population trends between 2012-13 and 2016-17—their rate of population loss fell from -0.44 to -0.20 percent. Components of change are not reported by race/ethnicity, but this increase is likely due entirely to changes in net migration, with fewer Whites moving out and more moving into rural areas in 2016-17 compared with 2012-13.

The rural Black population continued to lose population in 2016-17 as well, but at a higher rate of loss than earlier (-0.20 versus -0.14 percent in 2012-13). American Indians increased their rural population throughout the period but at diminishing rates, while the Hispanic rate of growth remained near 2 percent per year throughout the period. In short, Rural America has continued to diversify racially and ethnically—but at a slower rate in 2016-17 than in 2012-13.