Education is often closely linked with economic outcomes. The most recent data from the Census Bureau’s 2015 American Community Survey show that workers with higher levels of education had higher median earnings, both in rural and urban areas. The data also show that jobs in urban areas are likely to pay more than in rural areas, especially for workers with higher levels of education.

In 2015, median earnings—the amount at which half of workers earned more and half earned less—varied by educational attainment and location. Earnings in rural areas ranged from a low of $21,235 for those with less than a high school diploma to a high of $51,996 for workers with a graduate or professional degree. Urban workers without a high school diploma earned about the same as their rural counterparts.

However, at every higher level of educational attainment, the typical urban worker earned increasingly more than the typical rural worker with the same education. For example, the premium for working in an urban area was an estimated $2,088 for workers with a high school diploma in 2015—and $10,534 for those with a bachelor’s degree.

Research suggests several factors may contribute to higher earnings in urban areas. Businesses that provide skill-intensive employment may be clustered in urban areas, where a larger market allows for closer proximity to customers and suppliers, shared infrastructure, and better matching between employers and employees. The density of businesses and people in urban areas may also facilitate the promotion and adoption of innovative ideas. These benefits may enhance the productivity of businesses and workers, contributing to higher urban wages.

However, differences between urban and rural workers in other characteristics—such as work experience, job tenure, and ability—may also contribute to this urban wage premium. Educational attainment is only one of many potential factors determining the wages that workers earn; the chart does not take these other factors into account.

Some studies have shown that higher urban earnings may encourage workers to leave rural areas. But other factors, like family ties and proximity to natural amenities (such as forest and lakes), may help keep or attract workers to rural areas. 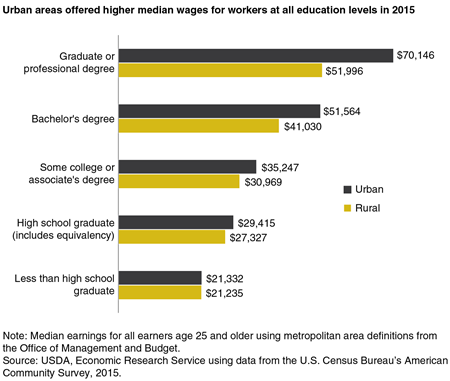