Events taking place on farms across America can affect retail food prices. Between October 2014 and April 2016, dairy farmers watched the prices they receive for milk fall by about 40 percent, weighed down in large part by rising domestic production, falling exports, and growing imports. Evidence of this larger supply and reduced demand for U.S.-produced dairy products reached consumers in the form of lower prices at U.S. grocery stores. For example, consumers paid about 16 percent less for a gallon of whole milk and 3 percent less per pound of Cheddar cheese in spring 2016 than they paid in fall 2014.

ERS researchers analyzed dairy price movements to understand how quickly and how completely swings in farm-level prices reach consumers. The research focused on whole milk and Cheddar cheese. Findings confirm that fluctuations in retail prices for whole milk and Cheddar cheese are generally less pronounced than swings in prices received by dairy farmers, and price changes experienced by farmers take time to reach consumers. Moreover, farm-level and retail prices do not track as closely for Cheddar cheese as they do for whole milk, reflecting the different processing steps and marketing costs for each product.

Prices Received by Dairy Farmers Down in 2015-16

Relatively low feed prices in 2015-16 have mitigated the impact of low milk prices on dairy farmers’ incomes. In October 2014, the dairy producer’s margin, or the difference between the all-milk price and ERS’s estimate of average feed costs per cwt of milk, was $12.85. Then, as the all-milk price started to fall, the estimated margin hit a low point of $4.14 in July 2015. It thereafter increased slightly, with a value of $6.46 in December 2015. By contrast, during the previous downturn in milk prices in 2009-10, the margin reached a low of negative $0.15 in June 2009. 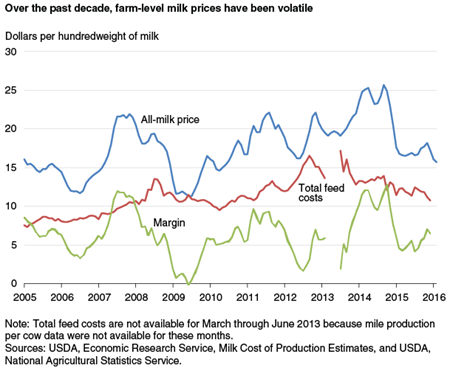 Higher milk supplies have pushed prices lower in 2015 and 2016. Following record-high farm-level milk prices in 2014, dairy farmers increased milk production to 208.6 billion pounds in 2015, or 1.2 percent more than in 2014. As of June 2016, USDA projects that milk production will reach 212.6 billion pounds in the current year, despite farmers receiving lower prices for their milk. Dairy farmers make longrun investments in their herds. For example, increases in milk production from adding a cow may not be fully realized for 2 or more years. While dairy farmers may be able to lower costs somewhat by removing less productive cows from the herd or modifying feed rations, many other costs to maintain the herd cannot be avoided by reducing production. Thus, in the short run, milk production may appear unresponsive to changes in prices received by dairy farmers. Supplying consumers with food products at retail stores begins with agricultural commodities produced by farmers. Other companies then add value to these commodities through processing, packaging, transporting, wholesaling, advertising, and retailing. The ERS Food Dollar Series shows that processing, wholesaling, and retailing account for over half of every dollar consumers spend for dairy products. The difference between a food’s final retail price and the farm value of the agricultural commodities used to produce the food is called the farm-to-retail price spread. Both the farm value and the farm-to-retail price spread can be used to anticipate how farm price volatility might affect retail food prices.

To determine the farm value of a dairy product, ERS uses farm prices reported by USDA’s Agricultural Marketing Service and USDA’s National Agricultural Statistics Service to estimate the amount of money dairy farmers receive for the milk in the dairy products. Milk sold to consumers as “whole milk” actually has some of the fat removed, so producing 1 gallon of whole milk at retail requires a little more than 1 gallon of farm milk. Producing a pound of Cheddar cheese requires about 10 pounds (1.2 gallons) of farm milk.

Farm milk has two economically significant components—milk fat and skim solids, each with its own farm price. One hundred pounds of farm milk typically contains about 3.7 pounds of milk fat and 8.6 pounds of skim solids. In 2015, the farm value of the milk components in a pound of Cheddar cheese averaged $1.54, and the value of the milk components in a retail gallon of whole milk averaged $1.65. Both values were down about 60 cents from 2014.

Looking at farm-to-retail price spreads for whole milk, Cheddar cheese, butter, and ice cream, one sees that the spread between the retail price and farm value is noticeably larger for Cheddar cheese ($3.84 in 2015) and ice cream ($3.91 in 2015) than for whole milk ($1.77 in 2015) and butter ($1.32 in 2013, latest available). These wider spreads reflect the greater value of nonmilk inputs in cheese and ice cream, such as processing, packaging, and advertising, and nonmilk ingredients, such as nuts and cookie bits. 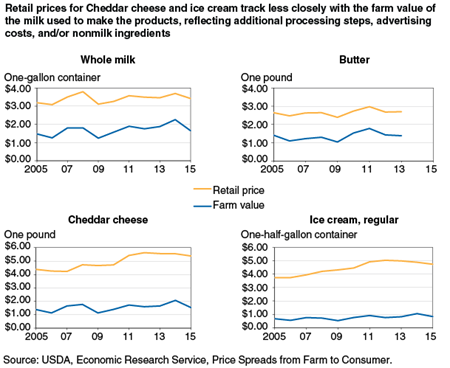 Retail dairy prices have been less volatile than prices received by farmers in recent years when measured in absolute terms, too. While the farm values of a gallon of whole milk and a pound of Cheddar cheese were both down about 60 cents between 2014 and 2015, annual average retail prices for these two dairy products were down about 27 cents and 16 cents, respectively.

To better understand the interplay between farm-level and retail dairy prices, ERS researchers used monthly data to develop price transmission models for whole milk and Cheddar cheese that try to capture the nuances of how each dairy product is produced and marketed. In many modern agricultural markets, price transmission—the passing on of changes in input prices to the retail price—is neither complete nor immediate, since much of the value added to farm commodities like milk is provided by a network of companies. Agricultural products passing through these companies may also undergo numerous transformations as they travel through a supply chain to retail outlets.

Researchers found that relatively straightforward price transmission models well explain retail price movements for whole milk. This is consistent with the fact that farm milk used to make fluid milk products typically moves fairly quickly from the farm to a fluid milk processor who pasteurizes, homogenizes, adjusts for fat content, and packages the products to be delivered directly to retail outlets. These models also maintain a closer relationship between farm and retail prices, though price changes experienced by dairy farmers still take time to reach consumers. In one model estimated by ERS researchers, if the farm value of the milk components in a gallon of whole milk were to fall by 50 cents in 1 month, the retail price of the gallon would decrease by about 23 cents within 3 months, 30 cents within 6 months, and 39 cents within 1 year.

More complex models are needed to explain retail price movements for cheese. Milk used to make cheese tends to pass through a larger number of hands before reaching consumers. Cheese manufacturers may buy milk from farmers to produce cheese which they, in turn, may deliver in barrels or blocks to other companies for further processing. Cheese may also be aged. While some cheeses, such as Mozzarella, are ready to eat within days of being manufactured, a mild Cheddar might age for several months and an extra sharp Cheddar might age for a year or more.

While the price transmission models developed by ERS for whole milk maintain a closer farm-to-retail price relationship, those developed for Cheddar cheese allow retail and farm prices to move more independently, depending on a number of factors. Cheese manufacturers, for example, may not adjust their output with modest volatility in the prices they pay farmers for milk. If so, the supply of cheese at wholesale will not be affected, and consumers are unlikely to see any impact. The age of the cheese may also be important. Wholesale cheese buyers may negotiate prices with their customers with little regard to the current farm price of milk or the price of milk at the time the cheese was manufactured.

Forecasting how retail prices might respond to farm price movements is also more difficult for Cheddar cheese given the additional factors that can affect the farm-to-retail price relationship. In one model estimated by ERS, assuming that the farm value of the milk components in Cheddar cheese had already been low during the previous month and only a small additional price drop was needed to push cheese manufacturers to increase production levels, a 50-cent decrease in the farm value would lower the retail price of Cheddar cheese by about 15 cents per pound within 3 months and 18 to 19 cents within 6 months. Retail prices would remain about 18 to 19 cents lower after 1 year. However, according to the same model, there may be little or no change in the retail price of Cheddar cheese for up to 9 or 10 months if manufacturers were not already on the cusp of adjusting production levels. Retail prices would be about 8 cents per pound lower 1 year later.

Volatility in farm-level prices generates interest in how quickly and how completely farm price changes show up at grocery stores. Findings confirm that retail prices for less processed foods like whole milk fluctuate with prices received by farmers. However, price changes experienced by farmers can take time to reach consumers and, because value added through marketing services accounts for much of a food’s retail price, prices paid by consumers are unlikely to rise and fall as much as farm prices in percentage terms. Moreover, if a food product is more highly processed and passes through a larger number of companies’ hands before reaching consumers, like Cheddar cheese, its retail price is likely to be even less responsive to prices received by farmers.

From September 2014 to April 2016, prices received by U.S. dairy farmers fell by about 40 percent. This reflects increased domestic production and events overseas that increased imports and reduced exports. Several factors helped account for these lower exports and higher imports: