In October 2015, ERS began publishing data on monthly and annual commercial disappearance (use) of dry whey, whey protein concentrates (WPCs), and lactose since 1995. The data show that while domestic use has declined for dry whey and fluctuated widely for WPCs and lactose, exports of whey products have seen strong and steady growth driven by robust demand in Asia and New Zealand.

A brief history of U.S. whey

Whey is a byproduct of cheese production. To make cheese, manufacturers add enzymes to milk, which causes it to curdle. The curds are then separated and formed into cheese, leaving a cloudy and odorous liquid—whey. Liquid whey can be dried, usually through a spray-dry process. It can also be processed into WPCs, with protein content ranging from 25 to over 90 percent, and lactose. Other processed whey products include concentrated whey, reduced-lactose whey, and demineralized whey.

For many years, most of the U.S. whey output was disposed of in streams, sewers, or lagoons designed for the purpose. Although manufacturers returned small amounts of whey to farms for use as animal feed, the bulkiness of the product made it expensive to transport and limited its commercial use. Over time, technological advancements reduced the cost of drying whey, allowing broader use of it in food manufacturing and as animal feed. However, with the rapid rise in U.S. cheese production in recent decades, the whey supply grew to far exceed domestic demand.

A look at domestic commercial disappearance of whey products

ERS compiled data on U.S. whey production, exports, imports, and annual beginning and ending stocks from several Federal Government agencies to estimate domestic commercial disappearance of dry whey, whey protein concentrates, and lactose. Commercial disappearance, a proxy for commercial use, is calculated for a given year by subtracting the sum of exports and ending stocks from the total supply, which is the aggregate of beginning stocks, production, and imports.

ERS data show that, on average, domestic commercial disappearance of dry whey declined from 1995 to 2014 (-4.9 percent compound annual growth rate (CAGR)), while that of WPCs and lactose grew slowly (1.3 percent and 2.2 percent CAGR, respectively) but with many ups and downs. 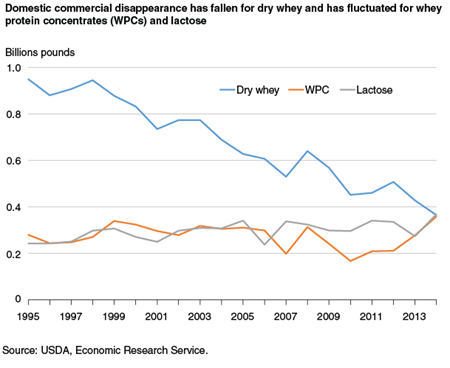 While it is difficult to draw firm conclusions about the drivers of domestic-use patterns of whey in the absence of detailed industry data, three factors may be at play. First, demand for WPCs for use in beverages and food products has been strong. Data from the American Dairy Products Institute, for example, show strong growth in domestic use of WPCs in sports powders, beverages, sports bars, and prepared mixes and blends since 2011.

Third, other protein sources, such as milk protein and soy protein products, are sometimes used as substitutes for whey protein, depending on their prices relative to whey. Substitution among various sources of protein could account for some of the year-to-year fluctuations in domestic use of whey. 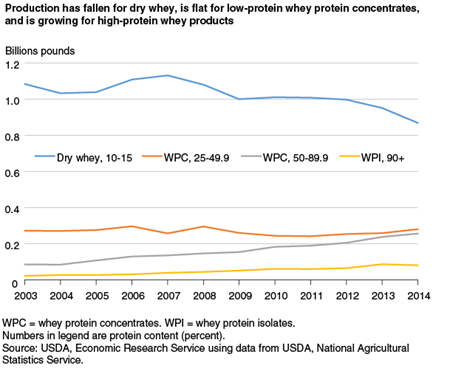 The whey to global markets

Unlike domestic use, U.S. exports of whey products have grown substantially since 1995, driven primarily by demand in fast-growing Asia-Pacific economies. U.S. exports of lactose increased the most in absolute terms, reaching 756 million pounds in 2014 from a little over 120 million pounds in 1995. China, which uses lactose in infant formula, has been the leading import market for U.S. suppliers. U.S. whey exports to New Zealand, where lactose is widely used to standardize protein content of milk powder, have also increased markedly.

Similarly, U.S. exports of WPCs have had strong growth since 1995, albeit from a much lower initial level than lactose. Between 1995 and 2014, annual U.S. exports of WPCs increased twentyfold to 223 million pounds and annual exports of dry whey doubled from 207 million pounds to 504 million pounds. As with the domestic market, a growing appetite for protein has fueled exports of WPCs, which are used in the production of a wide variety of foods and beverages. Whey products are also a prominent source of nutrition for animals in some countries, including China. According to USDA’s Foreign Agricultural Service, nearly half of China’s whey protein imports from the U.S. are used for animal feed. 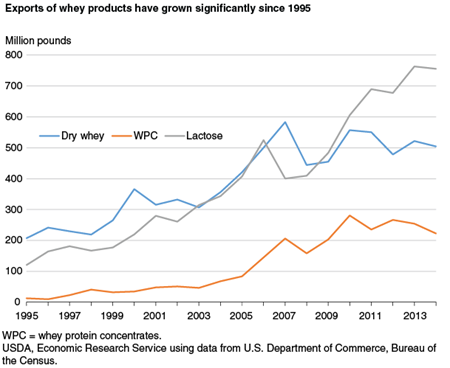