Support for the Organic Sector Expands in the 2014 Farm Act

U.S. organic food sales have shown double-digit growth during most years since the 1990s and were estimated to have reached over $32 billion in 2013. According to the Organic Trade Association, organic food purchases now account for approximately 4 percent of total at-home U.S. food sales. Certified organic farmland has also expanded, although not as fast as organic sales, and growth in certified organic cropland has slowed for a number of crops in recent years. Two of the top food retailers in the United States recently announced organic initiatives to expand the number of organic products they sell, which could further boost demand.

Fruit and vegetable growers and producers in other high-value, market-driven sectors have adopted organic management systems much more widely than producers of other crops. The shortage in domestic supplies is primarily for organic corn, soybeans, and other crops that are primarily used as feed grains. These crops have the lowest adoption levels among U.S organic farming systems. While over 10 percent of U.S. vegetable acreage for carrots and lettuce and about 5 percent of fruit acreage was under organic management in 2011, only 0.3 percent of U.S. corn and 0.2 percent of soybeans were grown under certified organic farming systems. Overall, acreage used for organic agriculture accounted for 0.6 percent of all U.S. farmland in 2011 (0.5 percent of all U.S. pasture and 0.8 percent of all U.S. cropland). 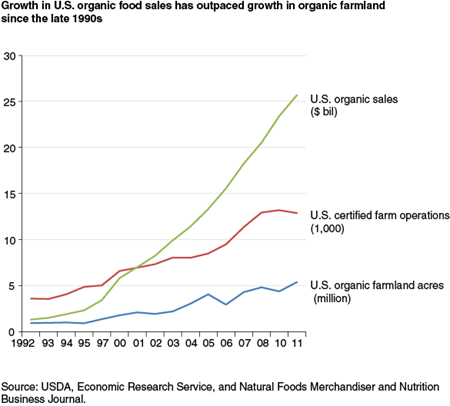 According to the most recent Census of Agriculture, the farm value of organic sales increased over 90 percent between 2007 and 2012 to $3.12 billion but still accounts for only 0.8 percent of the total value of U.S. agricultural production. Organic imports are helping bridge the organic supply shortfall in the United States and have been increasing since 2011, when the Department of Commerce began tracking a select set of organic products. Tracked organic export products are mostly fresh fruits and vegetables, while tracked imports include a wider range of fresh and processed products. In 2013, the value of U.S. organic imports being tracked was $1.4 billion, and the top U.S. organic imports (in value) included tropical and subtropical products (bananas, coffee, olive oil, and mangos) which the United States does not produce in large quantities. Soybeans are another top organic import, and organic grain and oilseed imports are helping fill the domestic production gaps in these crops. Fresh apples, lettuce, and grapes were the top three U.S. organic exports in 2013, accounting for just over half the total value, $537 million, of tracked organic exports.

ERS analysis of national corn and soybean survey data found that total production costs were substantially higher per acre for organic corn and soybean operations than for their conventional counterparts. However, organic operations were more profitable than conventional operations, mainly because the price premiums paid for organic corn and soybeans outweighed their higher production costs. The low level of organic system adoption for these crops may include challenges other than profitability, such as the high managerial costs and risks associated with shifting to a new way of farming, limited marketing and technical infrastructure, and the 3-year organic transition period required to become certified and receive organic prices.

USDA set a goal several years ago to increase the number of organic operations in the United States by 25 percent between 2009 and 2015, and the latest Farm Act supports USDA’s efforts to provide research, technical services, risk management, and other support for organic and transitioning farmers. Funding for organic research, financial assistance for conservation practices, certification cost-share assistance, and data collection was increased in the 2014 Farm Act, continuing support for the organic sector that began in 2002 when USDA implemented national organic standards. Funding was also expanded for USDA’s National Organic Program, which regulates organic standards, labeling, and certification. 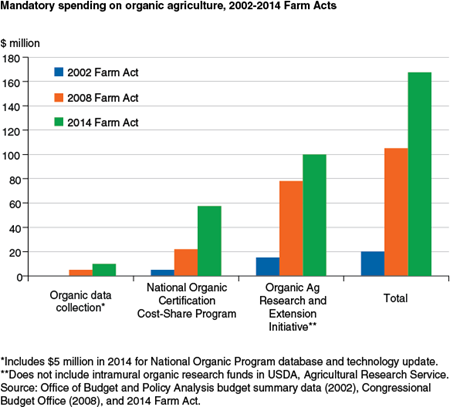 Organically grown products are “credence goods,” meaning that consumers cannot visually distinguish them from conventional goods and must rely on labels and other product information. Congress passed the Organic Foods Production Act of 1990 to establish national organic standards that facilitate marketing and provide consumer assurance. In 2000, USDA published final rules for the National Organic Program (NOP) to carry out this legislation. Many consumers have come to rely on the “USDA Organic” label since it was implemented in 2002.

The 2014 Farm Act included several new provisions to improve enforcement of organic regulations, which could help boost consumer confidence in the organic label. The 2014 Farm Act also expanded authorized annual funding for NOP to $15 million, a substantial increase from previous funding levels (NOP was authorized at $5 million in the 2008 Act, increasing to $11 million in 2012).

To help defray the costs of organic certification incurred by producers and handlers under the National Organic Program, USDA provides financial support through the National Certification Cost-Share Program. The 2014 Farm Act expanded 2014-2018 funding for this program to $57.5 million, more than doubling funding levels under the 2008 Farm Act. The increase in funding for the organic certification cost-share program may help attract small-scale producers in particular, since the cap is high enough to cover a majority of the certification fees for smaller operations. The maximum Federal cost share is 75 percent annually, with payments up to $750 per producer or handler. According to data from a national USDA survey in 2008, U.S. farmers reported that the average cost of organic certification was $1,264 per farm. Only two States—Arizona and New Mexico—had average certification expenses above $2,000 per farm, and average expenses were below $1,000 per farm in many States. However, fewer than half of the respondents to USDA’s national organic producer survey in 2011 reported enrollment in the certification cost-share program.

Another USDA program designed to support organic and transitioning farmers is the Organic Environmental Quality Incentives Program (EQIP) Initiative. USDA’s EQIP program was created under the 1996 Farm Act to provide technical and financial assistance for conservation practices and activities, and the Organic EQIP Initiative was created under the 2008 Farm Act to provide targeted funding for conservation practices related to organic production and transition. However, the Act capped these targeted payments for organic and transitional farmers at a lower level than payments from the regular EQIP, and payments remain capped at the lower level under the 2014 Farm Act. Payments under the Organic EQIP Initiative are limited to $20,000 per participant annually or $80,000 over a 6-year period. Nonetheless, organic and transitioning farmers can receive the higher payment limit by enrolling eligible practices in the regular EQIP program.

Federal crop insurance has been less attractive to organic producers relative to conventional producers because the program’s coverage has generally not accounted for the higher prices that organic farmers receive for their crops. Producers choose a percentage of the maximum price set by USDA's Risk Management Agency (RMA) for their commodity, which is used to determine the value of insurance coverage. For many commodities, the maximum price election does not reflect the price premium that growers receive for their organic production. In 2013, an organic price election was available for eight crops in the crop insurance program. Beginning in 2014, there is a new contract price option available for organic crops grown under contract to be insured at the contract price. However, many organic farmers sell their harvested crops in the “spot market,” where commodities are bought and sold in open market transactions for immediate delivery, rather than producing their crops under contract with a buyer for a specified price. The 2014 Farm Act requires USDA’s Risk Management Agency to expand organic price elections for producers insuring crops by 2015, making crop insurance more attractive to all organic producers.

USDA regulation defines organic farming as an ecological production system and specifies that practices be integrated to foster cycling of resources, promote ecological balance, and conserve biodiversity. Organic farming is based on detailed knowledge that is often region and crop specific. In the 2014 Farm Act, total mandatory funding for the Organic Agriculture Research and Extension Initiative (OREI), USDA’s major organic grant program, is set at $20 million annually—just above its annual funding level under the 2008 Act. Renewal of the OREI will help researchers continue addressing the sector’s research needs. The number of high-quality research applications for this competitive grant program has substantially exceeded the number that can be funded since the program’s inception in 2002.

In the 2008 Farm Act, Congress cited the need for research on the potential of organic farming to capture atmospheric carbon and store it in the soil. According to findings published in the Proceedings from USDA’s Organic Farming Systems Research Conference held in Washington, DC, in 2011, experimental trials in university and other settings across the United States have shown enhanced soil fertility, lower energy use, and increased retention of carbon and nitrogen in organic plots, compared with conventional plots. The 2014 Farm Act encourages research on weed and pest management for organic farming systems that maintain healthy water resources. OREI research in this area will be aimed at transitioning and established organic farmers and handlers. The 2014 Farm Act also continues total mandatory funding to improve economic data on the organic sector at $5 million over the lifespan of the Act; and added another $5 million to upgrade the database and technology systems of USDA’s National Organic Program.

The 2014 Farm Act also addressed commodity research and promotion programs, which are established under Federal law at the request of their industries. These programs are funded through industry assessments (fees) which allow farmers, ranchers, and other stakeholders to pool their funds and develop coordinated research, promotion, and consumer information that helps develop and improve the markets for their products. The Act clarified that all certified organic producers, including those that also have conventional farming operations, may be exempted from commodity research and promotion programs on their organic production. In the past, all farmers, including organic farmers, have often been required to pay commodity assessment fees, although these programs did not target organic research and promotion.