Onfarm Energy Use Fairly Steady in 2001-11, But Share of Production Costs Rose

Higher energy prices over the past decade have affected the agricultural sector’s use of energy-intensive production inputs. Although agriculture’s demand for energy has historically been less than 2 percent of total U.S. energy consumption, energy-based inputs account for a significant share of agricultural production costs. For example, over 30 percent of total production expenditures by corn, sorghum, and rice farmers in 2011 were for energy-intensive inputs.

Energy is used for agricultural production both directly, in the form of fuels and electricity to run farm machinery, and indirectly, through the use of energy-intensive inputs, such as fertilizers and pesticides employed to grow crops. From 2001 to 2011, direct energy use consistently accounted for most of the energy used in farming (63 percent in 2011). Fuel usage is the largest individual component of onfarm energy use, followed by indirect use through the energy embodied in fertilizers and pesticides. Fuel energy use increased slowly through the early 2000s before spiking in 2009 as fuel prices dropped from the previous year’s levels. In 2011, higher prices led to a decline in fuel use.

As energy prices rose during the last decade, farm operators adjusted their practices to reduce both direct and indirect energy use where possible. Effective measures taken by farmers to offset higher costs include applying fewer inputs, using more efficient machinery, and reducing field operations. Indeed, during a period in which U.S. agricultural output increased by roughly 10 percent, total onfarm energy use rose only 6 percent. Nonetheless, as energy prices trended upward over the decade, the share of energy inputs in total production costs increased. For major field crops, energy’s average share of total production costs increased by 4 percentage points between 2001-05 and 2006-11. 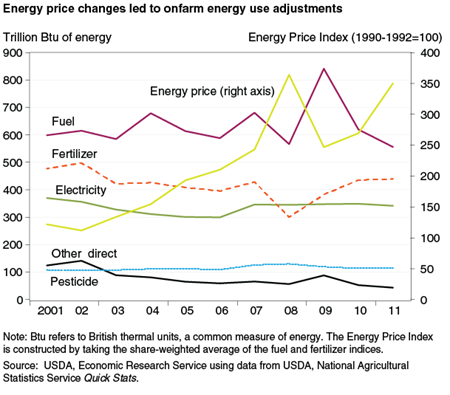