China’s agricultural productivity grew rapidly following the implementation of a series of economic reforms since 1978. Reforms led to more efficient resource allocation. China also began to disseminate new technologies (including improved seed varieties and animal breeds) and encourage mechanization. These “agricultural modernization” efforts laid a broad foundation for improved agricultural productivity. But evidence suggests that this growth may not continue into the future. With about 20 percent of the world’s population, 6.5 percent of its land area, and rising living standards, China’s ability to improve farm productivity will have a direct bearing on global food markets. China is already the leading importer of soybeans and cotton and has recently emerged as an importer of other major commodities, including corn, pork, wheat, and rice. A slowdown in productivity growth could bring further demand for imports.

All of China’s regions have experienced strong growth in agricultural production since the mid-1980s fueled by both input and TFP growth, but the relative contribution of these two factors differs by region. Provinces with the most rapid TFP growth include a mix of coastal regions that led China’s economic development and several western provinces. Most northeastern and northern provinces exhibited more input growth. Although the growing economy has pulled labor and land away from farming, the development of China’s nonfarm sectors may have benefited farming by generating funds for investment in public infrastructure, science, and technology. Relaxed restrictions on foreign trade and investment may also have enhanced agricultural productivity by improving access to new technology and new markets.

However, the rapid growth in the past few decades may not have been sustained in recent years. Annual TFP growth peaked during 1996-2000 at 5.1 percent before slowing to 3.2 percent in 2000-2005. It then declined by 3.7 percent per year in 2005-07. The significance of this slowdown remains unclear. It may reflect a turning point in China’s agricultural productivity growth, in which case gains from earlier reforms and technology transfers from developed countries have been exhausted. Alternatively, it may simply be the effect of transitory events such as animal disease epidemics or discrepancies in data. As urbanization draws more labor and land from agriculture and accelerates changes in food consumption, the capacity to reestablish positive agricultural TFP growth is important to China’s future. 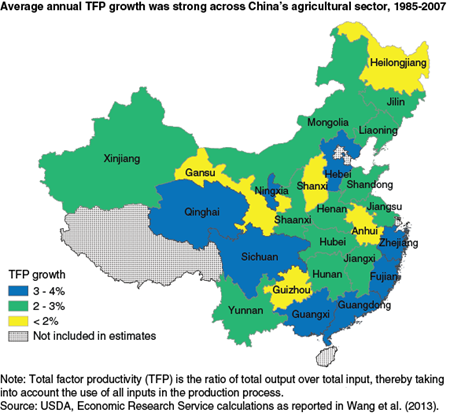