What effect do changes in commodity prices have on wholesale and retail food prices? Economic theory suggests that the extent to which cost changes are passed through to consumers depends on the market power of producers at each stage of production as well as the value added to the food product by each producer. Market power and degree of processing vary by commodity. ERS analysis of coffee industry data found that changes in coffee bean costs are passed through to wholesale and retail coffee prices. Coffee manufacturers, however, appear unable to take advantage of the variation in coffee bean prices to raise wholesale prices beyond the change in bean costs.

Over the past 10 years, coffee bean prices have varied between 3 and 20 cents per ounce. Coffee bean prices fluctuate with supply, driven by factors such as the weather in coffee-producing countries and the entry of new producers into the international market. Wholesale and retail food prices are generally more stable than commodity prices. Between 1997 and 2002, average prices charged by coffee manufacturers dropped from 23 cents to 17 cents per ounce, while average retail coffee prices dropped from 25 cents to 19 cents per ounce. 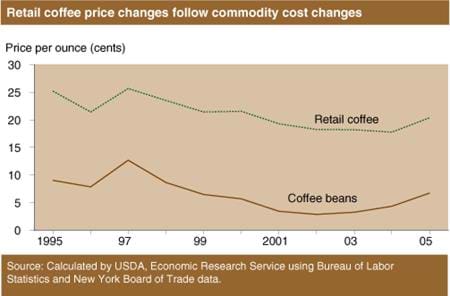 Some studies of cost pass-through in other food industries have found that manufacturers are often more quick to pass along price increases in ingredient or other input costs than to pass on lower input costs. ERS tested for this type of asymmetry, and the analysis did not systematically support the view that prices respond more quickly to either price increases or decreases. Retail prices respond similarly to both increases and decreases in coffee bean prices.