The end of the decades-old marketing quota system in 2002 required U.S. peanut growers to adapt to a more market-oriented policy structure similar to other major field crops. This development prompted substantial changes in the peanut sector, including lower prices for many peanut producers and major geographical shifts in production. While the sector appears to have adapted quickly to the new policy environment, it faces new uncertainties as Federal budget pressures and the implications of existing and potential new trade agreements loom ahead.

Lower prices have fueled exceptionally strong growth in demand since 2002, and yield gains over the same period suggest increases in efficiency. Data from the 2004 USDA Agricultural Resource Management Survey suggest U.S. peanut farmers are relatively strong financially. Peanut farmers have an average household income about 80 percent greater than the average for all U.S. households, and they have higher levels of wealth than other farm and nonfarm households. 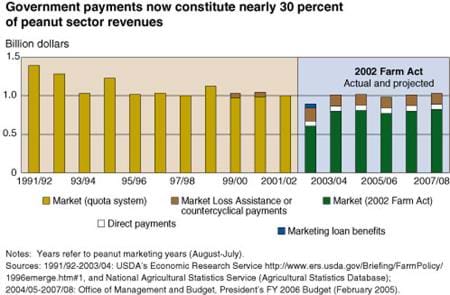 At the same time, the peanut sector has much at stake as policymakers begin to discuss potential changes to commodity programs. Government outlays constitute a comparatively large share of peanut sector revenues on both a per base acre and a value-of-production basis. Government payments to the peanut sector under the three main commodity programs (marketing loans, direct payments, and countercyclical payments), for example, are projected to average $226 million annually during the 2002 Farm Act (2002-07). During 2003-05, these payments represented only about 2 percent of total payments made to all eligible crops under these programs, but equalled 29 percent of cash receipts from peanut production. Continued strong production growth in 2005 has led to lower peanut prices, which could push government outlays for income support even higher, at least in the short run. In the longer run, international trade agreements, which are gradually opening the U.S. market to increased peanut imports, could put additional pressure on prices, but expanding market access abroad could provide new export opportunities.