Soybean trade is highly concentrated: two land-abundant countries—Brazil and the United States—supply most soybean exports, and China accounts for over 60 percent of global soybean imports.

Recent ERS research shows that international trade in soybeans began growing when China liberalized imports to meet the demand for protein in animal feed and edible oils. A tariff structure favoring imports of soybeans, domestic policies favoring production of cereal grains, and rapid expansion of processing capacity drove China’s growth in soybean imports. More flexible U.S. policies facilitated production response by U.S. farmers to supply more soybeans, and Brazil’s expansion of output in its inland Cerrado region propelled supply growth in recent years. China imported even more Brazilian soybeans after imposing a 25-percent tariff on U.S. soybeans during 2018, but the overall volume of China’s imports fell for the first time in 15 years. USDA’s 10-year projections indicate that China will continue to account for most future growth in global soybean imports even if the tariff remains in place. However, USDA projects slower growth in China’s imports than in the previous decade.

USDA’s long-term agricultural projections suggest that in the coming decade, consumption of Mexican and U.S. grown corn will continue to increase due to expanding livestock production in both countries.

Mexico is the largest foreign market for U.S. corn in terms of export volume and value. The North American Free Trade Agreement (NAFTA), implemented in 1994, facilitated closer integration of the U.S. and Mexican corn markets, as evidenced by rising exports to Mexico and the co-movement of U.S. and Mexican prices. Since the start of 2008, U.S. corn exports to Mexico have been free of tariff and quota restrictions due to one of NAFTA’s provisions. The recently signed United States-Mexico-Canada Agreement (USMCA) would continue tariff- and quota-free trade in corn. 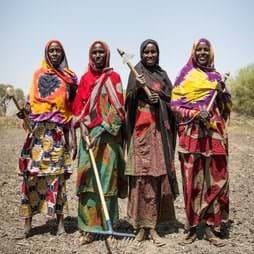 ERS projects the food security situation in 76 low- and middle-income countries through 2029.

ERS publishes the International Food Security Assessment to inform U.S. policymakers as well as international donor organizations of the food security situation in 76 low- and middle-income countries.  The report provides projections of food demand and access based on ERS’s food security model, which allows for analysis of income and price changes on food security. Given projections for lower food prices and rising incomes, food security for the 76 low- and middle-income countries included is expected to improve through 2029. The share of population that is food insecure is projected to fall from 19.3 percent in 2019 to 9.2 percent in 2029. The number of food-insecure people is projected to fall markedly from 782 million to 399 or a decline of 45 percent, faster than the decline in the food gap, indicating somewhat slower change in the intensity of food insecurity, at the aggregate level.