Landscape and climate have shaped the geography of rural growth and decline over the past 40 years. The rural outdoors has become a major asset for rural communities. The rural outdoors can be enhanced through the construction of recreation facilities, but undeveloped rural landscapes have appeal on their own, both for recreation and as attractive places to live.

ERS researchers developed a natural amenities scale based on the premise that people are drawn to areas with varied topography; lakes, ponds, or oceanfront; warm, sunny winters; and temperate, low-humidity summers.

ERS has also pursued research on the possible amenity value of farmland and agriculturally based activities, exploring such issues as:

The amenity value of natural resources depends on how resources are defined and measured. For some purposes, it may be desirable to measure fixed resources that are not easily affected by human activity, such as the presence of mountains, lakes, and rivers. For other purposes, researchers may want to focus on resources that can be affected, either intentionally or unintentionally, by public policy, such as access to forestland. In the process of trying to understand the role natural amenities play in the development process, ERS researchers have developed several measures, including:

The natural amenities scale was built from measures of climate, topographic variation, and water area—all relatively permanent features of an area unlikely to be affected by local economic activities or human settlement. This meant that natural amenities could be studied as an influence on rural growth or economic change without worrying that the causal direction went the other way. The measures were not chosen based on any theory, but rather on what features seemed attractive to people. The individual measures were combined into a scale by summing standardized scores, which meant that each indicator was given equal weight. The justification for the scale was, first, that it was the simplest way of combining measures and second, that in statistical analyses the scale was almost as good a predictor of population change as all the measures considered separately when included in a multivariate analysis. 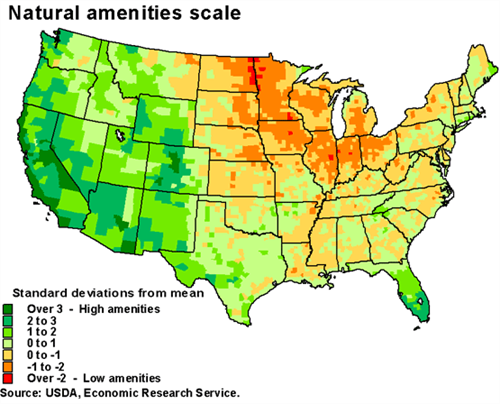 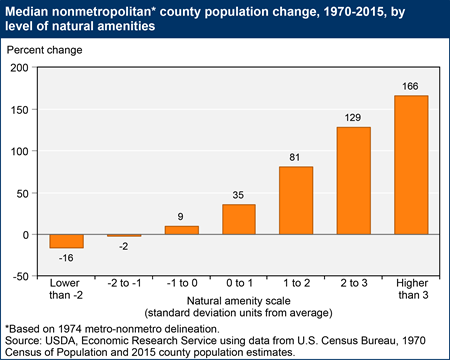 The natural amenities scale, based on relatively permanent characteristics of counties-climate, topography, and lake, pond and ocean water area, is necessarily only a partial measure of an area's natural attributes that might influence migration and development. Area attractiveness also depends on how land is used. Landscape preferences research confirms that water and varied terrain are attractive features, but also shows that scenery with a mix of forest and open country is attractive to people, much more so than scenery that is either largely treeless or extensively forested. Rural migration patterns suggest that people have followed these preferences in choosing where to live. 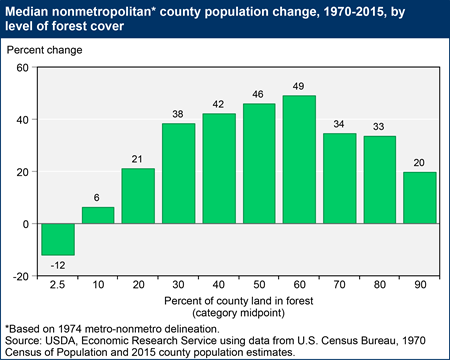 Outdoor Amenities Scale Based on Housing Values Relative to Income

Relative to income, people generally pay more for housing in areas offering a better quality of life. A recent study took advantage of this relationship to develop a new measure of outdoor amenities that included the 6 climate, water and topography measures in the natural amenities scale, forest, and, because recreation in rural areas is usually built around outdoor amenities, the proportion of employment accounted for by hotels and restaurants. In effect, the measures were weighted by the extent that they accounted for the difference between local housing values and the expected values given homeowner income. The statistical method took into account the fact that people prefer some but not extensive forest. The measure proved highly related to the natural amenities scale, with the inclusion of forest in the outdoor amenities scale accounting for almost all the difference.

The Relationship Between Natural Amenities and Rural Growth

These various natural amenities measures have been used to explore a number of rural development related issues. While it is clear that natural amenities are associated with both population and job growth in rural areas, the mechanisms through which they influence individual decisions regarding migration and employment are complex. One question is whether growth occurs because new jobs attract migrants to an area or because new migrants create new jobs in an area. Research suggests that natural amenities lead to rural growth in the 1990s principally by attracting people, which in turn led to job growth.

While important, the presence of a local creative class may not be enough to generate growth. For instance, people doing scientific research are part of the creative class, but if they work in a large organization, their creative efforts may be focused on the organization rather than the local economy. Research suggests that counties with a combination of entrepreneurship and creative class are the ones that showed the most net gains in the number of businesses and jobs in the 1990s. This was especially true in higher outdoor amenity areas, but also true in rural counties with average amenities.

Much of the research focusing on the role natural amenities play in the rural development process was published in scientific journals. While ERS supported this research, the views and opinions expressed in these articles are the authors' and do not necessarily represent those of the agency or the USDA. They are made available here for your convenience, but are not official USDA publications.