Note: The terms "nonmetropolitan" (nonmetro) and "rural" are used interchangeably, as are "metropolitan" (metro) and "urban." References to metro or nonmetro county status reflect either the 2003 or the 2013 Office of Management and Budget definitions, as indicated.

This topic page examines employment trends in rural (nonmetropolitan or nonmetro) and urban (metropolitan or metro) U.S. counties from 2007 to 2021, using data from the U.S. Bureau of Labor Statistics. This time period covers the Great Recession (2007–09), the ensuing recovery (2010–19), and the COVID-19 pandemic (2020–21). Examining employment trends during these periods shows how rural and urban areas were impacted by these economic events. Employment trends also varied by age, race, and ethnicity during the 2007–21 period—revealing the uneven impacts of economic recession and recovery on different demographic groups and geographic areas across the rural and urban United States.

After nonmetro counties lost 1.4 million jobs from 2007 to 2010, nonmetro employment grew slowly after the Great Recession and by 2019 had returned to 97 percent (20.4 million employed) of pre-Great Recession employment levels (21.0 million employed in 2007). The slow employment growth period from 2010 to 2019 partially coincided with the first ever period of nonmetropolitan county population decline between 2010 and 2016 (see Rural America at a Glance, 2019 Edition). The lack of rural population growth and coinciding soft demand for local goods and services likely contributed to slow employment growth in nonmetro areas.

Nonmetro total employment had not yet fully recovered from the Great Recession when, in 2020, the COVID-19 pandemic and measures taken to limit its spread by governments, businesses, and consumers resulted in nationwide job losses. Nonmetro total employment fell to 92 percent (19.4 million employed) of 2007 levels, lower than at any point during the Great Recession. Metropolitan areas lost a larger share of their jobs than nonmetro areas, but metro employment remained above 2007 levels. The share of jobs lost in metro areas was high due to more restrictive COVID-19 precautionary measures taken by urban local governments and because urban workers were more likely to work in 'nonessential' jobs (such as service-industry jobs) than rural workers. Many jobs transitioned to remote work during the pandemic, which may have benefitted workers who lived in places with reliable highspeed internet connections and workers in jobs where remote work is possible. Total employment increased 2.3 percent in nonmetro areas and 3.5 percent in metro areas from 2020 to 2021 but did not recover to pre-pandemic 2019 levels. 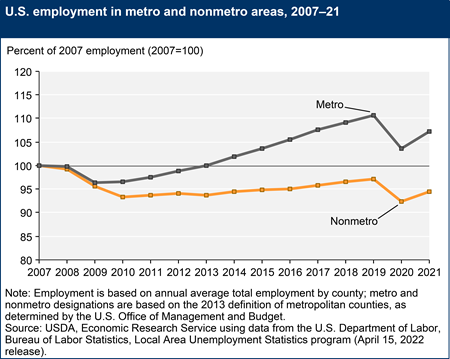 Labor force participation rates (defined as the percentage of the population that is either working or actively looking for work) decreased 2.6 percentage points for people ages 25–64 in the nonmetro United States and 0.7 percentage points in the metro United States from 2007 to 2019. The larger decrease in nonmetro labor force participation rates reflects the slower recovery in rural areas after the Great Recession and suggests that rural workers faced a choice between moving to urban areas to find work and remaining in rural areas where there were fewer jobs post-Great Recession.

People 65 and over were more likely to be employed or seeking employment in 2019 than in 2007. Increasing labor force participation rates for people 65 and over may indicate a lack of retirement savings or inadequate health insurance coverage (forcing people to remain in the labor force), but may also indicate better work opportunities and conditions (enticing some workers to remain at their jobs beyond age 65). 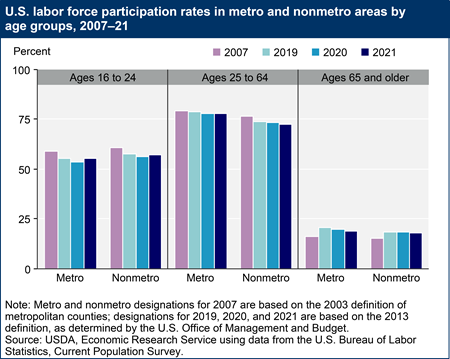