This topic page summarizes recent trends in rural (nonmetropolitan/nonmetro county) versus urban (metropolitan/metro county) labor markets. Rural employment is slowly recovering from the effects of the Great Recession of 2007-09. From its post-recession low, in 2010, to 2017, rural wage and salary employment has grown at an average annual rate of 0.5 percent, compared to 1.8 percent in urban areas. Average rural wage and salary employment in 2017 remained 2.0 percent below its pre-recession level. The rural labor-force participation rate among prime-age workers (those between the ages of 25 and 54) also remains low relative to pre-recession levels.

The following labor-market statistics are discussed in detail. References to metro or nonmetro county status reflect either the 2003 or the 2013 Office of Management and Budget (OMB) definitions, as indicated. For more details on data, definitions, and methods, see the Technical Notes.

Wage and salary employment (measured as number of full- and part-time jobs) in both urban (metro) and rural (nonmetro) areas fell by more than 5 percent between 2007 and 2010, reflecting the effects of the Great Recession. The average annual growth rate for rural employment between 2010 and 2017 was 0.5 percent, compared to 1.8 percent in urban areas. Following a near zero change between 2015 and 2016, rural areas added about 41,500 wage and salary jobs in 2017 (0.2 percent change). However, average rural employment in 2017 was still 2.0 percent below its 2007 peak. 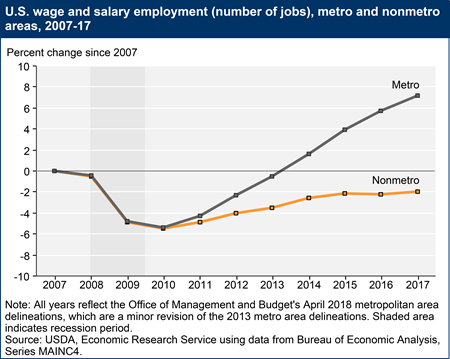 The employment-to-population ratio, defined as the number of employed civilians (including the self-employed) as a percentage of the full population 16 and older, fell sharply in both urban and rural areas during the recession and in its aftermath. Between 2010 and 2017, the urban employment-to-population ratio recovered by 2.5 percentage points, indicating that urban employment growth has outpaced the rate of urban adult population growth (which was 1.1 percent per year, according to Census data).

Employment-to-population ratios are lower in rural counties, mainly because of the higher share of retired people in those counties. The rural employment-to-population ratio has also been slower to recover from the recession. Between 2010 and 2017, it rose by 1.1 percentage points, again implying that employment growth has been faster than the relatively slow rate of growth of the rural adult population (which was just 0.1 percent per year). 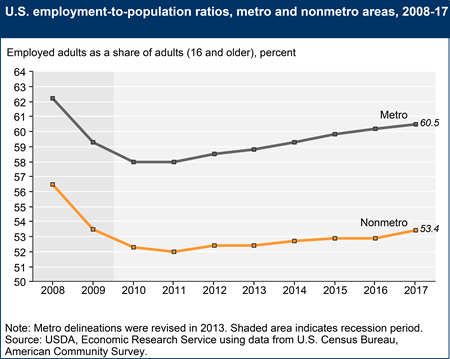 Unemployment rates are measured using the Bureau of Labor Statistics Current Population Survey (CPS). Rural unemployment stood at 4.2 percent in 2018, slightly above the rate of 3.9 percent for urban counties. Both of these figures are below their 2007 values, and, in fact, the national unemployment rate is the lowest since 1969. However, the decline in the unemployment rate is being driven not just by job creation, but also by people abandoning the search for employment, and exiting the labor force altogether (see the section on labor-force participation). 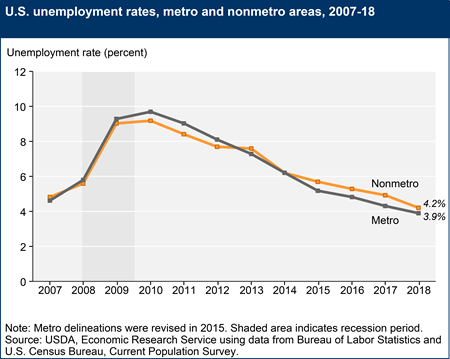 While many of the unemployed, and many new labor-market entrants, have found jobs since 2010, many others have chosen to stop looking for work, and both of these trends have contributed to a declining rural unemployment rate. The labor-market-leavers include retirees—as might be expected in an aging population—but also many people who have stopped looking for work for other reasons.

Rural areas have lower rates of labor-force participation, primarily because of their older populations. In addition, much of the decline in labor-force participation rates is the natural result of the aging of the population, especially in rural counties. One way to focus on factors other than aging is to look only at those between the ages of 25 and 54, the so-called prime-age working population. In urban areas, the prime-age participation rate in 2017 was just 0.8 percentage points below its 2008 level.

In rural counties, however, the prime-age participation rate in 2017 remained 2.7 percentage points below its 2008 level. This implies that more than just aging and retirement are responsible for the decline in rural labor market participation. In fact, prime-age rural residents were slightly younger and better educated and had marginally lower rates of disability in 2017 than in 2008, yet their participation rate still fell.

For metro areas, the remaining shortfall in the prime-age labor-force participation rate compared to pre-recession levels appears to be driven not by demographic or other structural factors, but rather by the lingering effects of the Great Recession, particularly for less well-educated workers. This suggests that continued economic growth could restore the metro prime-age participation rate to its prior levels. It is not clear whether this conclusion also holds for rural areas. 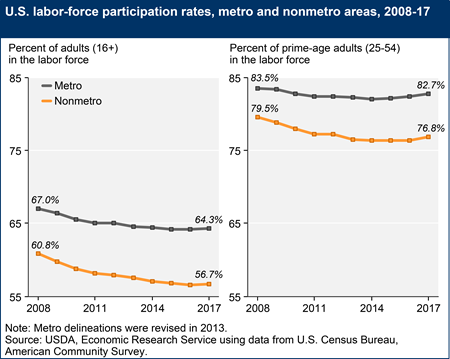 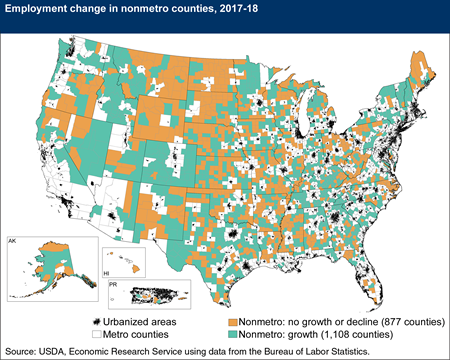 Employment by metro location: Many, but not all, sources of labor-market information can generate separate results for metro and nonmetro areas. However, in many datasets the definition of what counts as a nonmetropolitan area changes every 10 years, and the number of counties designated as nonmetro has steadily declined over the decades, due to population growth. This makes it difficult to estimate changes in the level of nonmetro employment over long periods of time; as the number of nonmetro counties declines, it will look as if "nonmetro employment" is falling, when in fact some of it is just being reclassified as metro employment. To address this problem, we draw on county-level employment estimates produced by the Bureau of Economic Analysis (BEA, Series MAINC4). These data are aggregated into urban (metropolitan/metro) and rural (nonmetropolitan/nonmetro) totals using, for all years, the Office of Management and Budget's April 3, 2018, revision to its 2013 metro-area delineation. The data cover wage and salary employment only; the BEA's data on the self-employed are not reported because they are not comparable to survey-based data, as they are not limited to those reporting self-employment as a primary activity. Note that these data are categorized by where the job is located, not where the employee lives.

Employment-to-population, labor-force participation, and unemployment rates: For the labor-force participation rates and employment-to-population ratios, we use the American Community Survey (ACS), while for the unemployment rate we rely on the Current Population Survey (CPS). The ACS has the advantage of being a larger survey with better coverage of nonmetro counties, and it should thus yield more precise nonmetro estimates than the CPS. However, ACS data are not yet available for 2018, and are only reported starting from 2008. In prior years, different questionnaire language relating to employment was used that yielded significantly lower estimates of the number of employed people. The CPS is the source for official labor-market statistics at the national level and has the advantage of being administered by trained interviewers, using a more detailed questionnaire that is better able to measure the unemployment rate. Note that the CPS metro/nonmetro results are not published on a monthly basis, due to concerns with the small nonmetro sample size. However, BLS provides ERS with special quarterly tabulations, which we further aggregate into annual averages.