Errata: On March 8, 2022, a chart and text on the Farm Structure and Organization: Farm Structure and Contracting topic page was reposted to correct a programming error. The chart showing the share of farms with contracts and the value of production under contract and a paragraph discussing the chart were corrected. No other text or values on the topic page were affected.

Broad descriptions of farms based on U.S. averages can mask variation among different sizes and types of farms. A farm classification—or typology—developed by the Economic Research Service (ERS) categorizes farms into more homogeneous groupings for reporting and evaluation purposes. The classification is based largely on annual gross cash farm income of the farm business, the primary occupation of the operator, and ownership of the farm.

Farm size is measured by annual gross cash farm income (GCFI)—a measure of the farm's revenue (before deducting expenses) that includes sales of crops and livestock, payments made under agricultural federal programs, and other farm-related cash income including fees from production contracts.

The farm typology focuses primarily on the "family farm," or any farm where the majority of the business is owned by an operator and individuals related to the operator, including relatives who do not live in the operator's household. USDA defines a farm as any place that produced and sold—or normally would have produced and sold—at least $1,000 of agricultural products during a given year. USDA uses acres of crops and head of livestock to determine if a place with sales less than $1,000 could normally produce and sell at least that amount. For more information, see the ERS report, Updating the ERS Farm Typology (EIB-110, April 2013).

Distribution of U.S. Farms, Value of Production, and Farm Assets 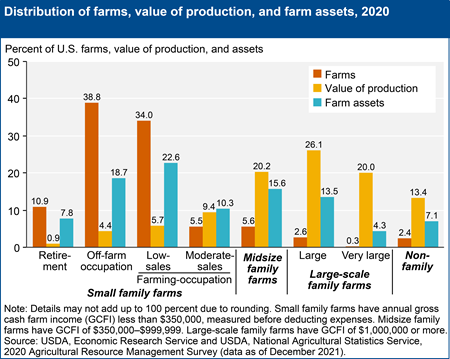 Contracts can potentially provide benefits to both producers and contractors. Farmers get a guaranteed outlet for their production with known compensation, while contractors get an assured supply of commodities with specified characteristics, delivered on time.

A contract is a legal agreement between a farm operator (contractee) and another person or firm (contractor) to produce a specific type, quantity, and quality of agricultural commodity. The Economic Research Service classifies contracts as either marketing or production.

Marketing contract. Ownership of the commodity remains with the farmer during production. The contract sets a price (or a pricing formula), product quantities and qualities, and a delivery schedule. Contractor involvement in production is minimal, and the farmer provides all the inputs. For crops, the contract is finalized before harvest. For livestock, the contract is finalized before the animals are ready to be marketed. 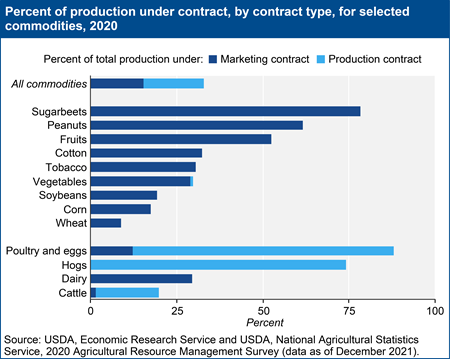 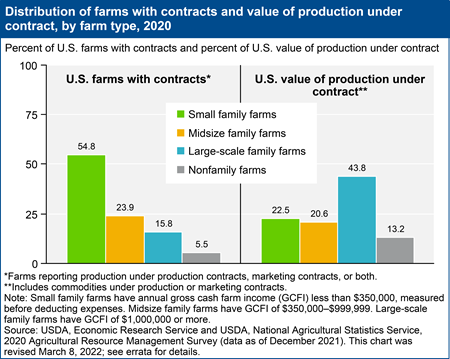