Wheat Sector at a Glance

Wheat ranks third among U.S. field crops in planted acreage, production, and gross farm receipts, behind corn and soybeans. In 2018/19, U.S. farmers are estimated to have produced a total of 1.884 billion bushels of winter, spring, and durum wheat on 47.8 million acres of cropland, up slightly from last year’s record-low planted area. Recent lows in wheat plantings are indicative of a long-term downward trend in wheat planted area and production. Since peaking in 1981, U.S. wheat planted area has dropped off by more than 30 million acres, and production has fallen by approximately 900 million bushes. 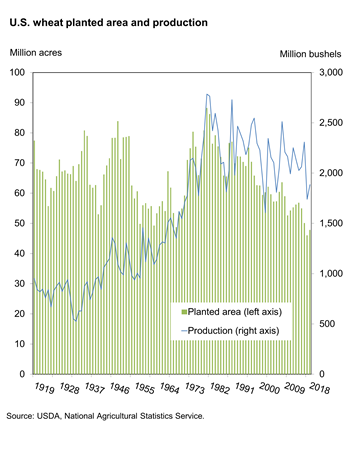 As foreign competition in international wheat markets has grown, farmers’ returns to planting wheat in the United States have declined relative to other crops and encouraged some farmers to reduce wheat plantings. Changes in farm legislation in the mid-1990s, which allowed farmers more flexible crop choices, also reduced wheat acreage.

Specifically, the 1996 Farm Act strengthened the market orientation of crop planting by eliminating the requirement that farmers maintain base acreage of a crop to qualify for Government payments. In addition, wheat sowings have lost ground to coarse grains and oilseeds due to technological innovations that have improved production prospects for corn and soybeans. Genetic improvement has been slower for wheat due to the food grain’s significantly more complex genetics and lower potential returns from research investments. Farmers grow wheat primarily for human food use, and U.S. food processors are wary of consumer reaction to products containing genetically modified (GM) wheat. No GM wheat is commercially grown in the United States.

Wheat is the principal food grain produced in the United States. The three primary varieties of the grain that are sown domestically are winter wheat, spring wheat, and durum.

Winter wheat varieties are sown in the fall and usually become established before going into dormancy when cold weather arrives. In the spring, plants resume growth and grow rapidly until the summertime harvest. Winter wheat production represents 70-80 percent of total U.S. production, or 1,100 million to more than 1,800 million bushels. 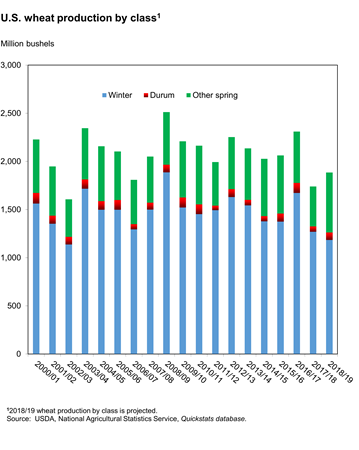 In the Northern Plains, where winters are harsh, winter wheat plantings are limited, and spring or durum varieties are favored. Spring and durum wheat are typically planted as soon as soil conditions permit in mid-March through April and harvested in the late summer or fall of the same year. Spring wheat typically constitutes about one-quarter of total U.S. wheat production, or 400 million to over 600 million bushels. Durum wheat is the smallest of the three major categories of wheat and typically accounts for about 75 million bushels, or 3-5 percent of total U.S. wheat production.

The three categories of wheat can be disaggregated further into five major classes: hard red winter, hard red spring, soft red winter, white, and durum. Each class has a somewhat different end use, and production tends to be region-specific.

Wheat milling byproducts—such as bran (outer seed coat of a wheat kernel), shorts (more inward layers of the seed coat that contain some starchy or floury components), and middlings (an intermediate fraction that consists of a combination of bran and shorts)—are used in the production of animal feeds.

U.S. consumer demand for food products made from wheat flour is relatively stable and largely unaffected by changes in wheat prices or disposable income. However, demand is closely tied to population and changing consumer tastes and preferences.

Although the United States produces only about 7 percent of the world’s wheat, it is a major wheat exporter. While it recently ceded the dominant role in world wheat exports to Russia and the European Union, the United States routinely ranks among the top three global wheat exporters. Rising global populations and incomes, especially in developing countries, have encouraged the expansion of world wheat consumption and, concurrently, global wheat trade. Despite expanding global wheat trade, the U.S share of global wheat exports is currently moving lower, trending at around 16 percent for the 2018/19 international wheat marketing year (the international trade year for wheat is July-June). 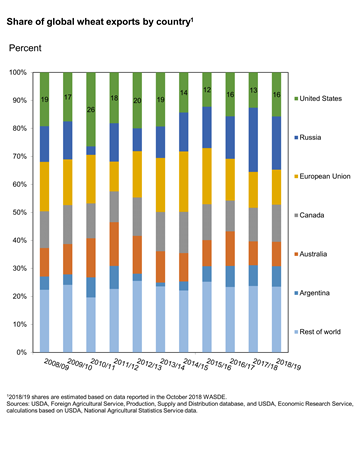 U.S. imports of wheat grain, mostly from Canada, are small but have grown from less than 0.1 million metric tons in the 1970s to an average of 2.7 million metric tons over the last 10 years. Imports of wheat products consist mainly of pasta and noodles from Canada, the European Union, and Asia. Historical data for U.S. wheat imports and exports are available from USDA's Foreign Agricultural Service (FAS) at Global Agricultural Trade System (GATS).

Since 2000, the United States, the European Union, Canada, Australia, Argentina, and the former Soviet Union (including the three major wheat exporters Russia, Ukraine, and Kazakhstan) have accounted for an average of about 90 percent of world wheat exports. Prior to 2000, these exporters combined to represent 95 percent or more of world wheat exports. However in in the last 10 years, the combined share of major exporters as begun to decline and numerous minor wheat-exporting countries have grown to account for an increasing share of global wheat exports (see “Rest of World” in the chart above).

While a handful of nations dominate wheat exports, there are numerous wheat-importing countries. Most wheat is imported by developing countries with limited production potential. Wheat is a staple food in many low- and middle-income countries and rising populations in various parts of the developing world have combined with strong economic growth to increase demand for both milling-quality and feed wheat. Most of these countries have limited ability to expand wheat production, which increases global demand for wheat imports. The largest growth markets for wheat imports include Africa, both North (Egypt, Algeria, and Morocco) and Sub-Saharan (Ethiopia, Kenya, Nigeria, South Africa, and Sudan), the Middle East (Iran, Jordan, Lebanon, Saudi Arabia, and Syria), and Southeast Asia (Indonesia, the Philippines, and Vietnam).