Poultry Sector at a Glance

Sales corresponding to 2017 are pictured in the map below.

U.S. poultry production has a competitive advantage in the world due to abundant domestic feed resources, including soybean meal and corn primarily. Feed is generally the most significant production cost across livestock, and poultry converts feed to human food products (meat and eggs) more efficiently than other livestock. Modern poultry genetics drove a dramatic increase in poultry feed conversion over time, requiring less feed (and duration) to produce market-ready birds (and eggs) and resulting in highly competitive product prices. Commercially-driven research in poultry genetics is concentrated at the firm and country level, and U.S. firms have a leading role.

Commercial poultry production starts with primary breeder birds selected to lay fertile eggs for hatching on the basis of desirable genetic traits. These birds’ progeny become breeders that eventually produce birds used directly for meat or table egg production. The period during which breeders grow to reach reproductive maturity can be 4.5 to 6 months after hatching and is generally longer for turkeys.

Timeframes vary for harvesting meat from broilers or turkeys and table eggs from layer chickens. Market broiler chickens are generally slaughtered before 2 months of age, while turkeys often reach 4 months before slaughter. Table-egg type chickens begin laying at about 4 to 4.5 months of age and start a cycle that can last 14-15 months, with additional production cycles optional after a molting period.

U.S. poultry firms integrate multiple stages of production more than other livestock producers; feed production, fertile egg and chick production, and poultry commodity harvesting often reside under the same firm. Production contracts are also very common, where the services of growers that house and manage birds, for example, may be contracted by an integrated poultry firm in exchange for a fee per bird. 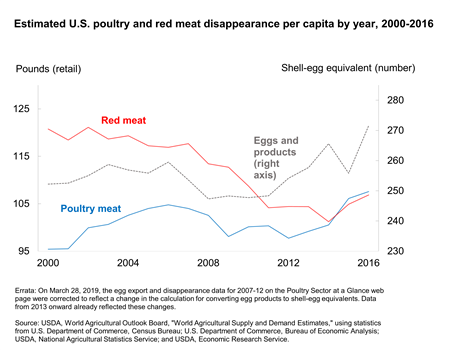 The majority of U.S. broiler exports are leg quarters and other products categorized as ‘dark’ chicken meat, and Mexico is the most significant foreign market for broiler meat. Mexico is also the destination for the majority of U.S. turkey exports, typically as cut-up parts shipped fresh or chilled for use by meat processing industries. The largest markets for U.S. egg exports are Mexico and Canada, where shell eggs can more easily be transported; more distant markets tend to import egg products, including dry products.

The interactive table and chart below show summary statistics for the poultry sector. Use the “Select a sector” menu in the upper corner to toggle between the major sector components. Variables can be graphed and compared in the chart.