Poultry/Eggs: The broiler production forecast for 2022 is lowered on recent declines in average weights and broiler-type layer inventories. Broiler exports are adjusted up on recent data. Production, export, and import forecasts for 2023 are unchanged from last month. Broiler prices are adjusted down in the second quarter based on recent weakening in weekly prices. The table-egg production forecast for 2022 is revised up based on higher-than-expected table-egg layer inventory data on May 1st and reported Highly Pathogenic Avian Influenza (HPAI) discoveries in May. The forecast for USDA benchmark wholesale egg prices (New York, Grade A, Large) is adjusted down to an average of 192.7 cents per dozen. Egg and egg-product import forecasts for 2022 and 2023 are adjusted down to reflect weaker-than-expected March and April imports. Turkey production is decreased 10 million pounds for the second quarter of 2022 but remains unchanged for the rest of the year and 2023 as HPAI cases dwindle. Ending stocks for 2022 are raised, and ending stocks for 2023 are unchanged. The 2022 export forecast is raised on changes to Mexican import restrictions. The 2022 import and 2023 trade forecasts remain the same. Second-quarter prices for 2022 are raised to 142 cents per pound as weekly prices continue to rise into the summer. Prices for the rest of 2022 and 2023 are unchanged.

The figure below shows the percentage changes in USDA production and price forecasts for 2023, compared with 2022. Among the main red meat proteins, beef production is forecast to decrease (-7.0 percent), and cattle prices are expected to increase (+9.4 percent). These changes are driven by tighter cattle supplies as the cattle herd contracts in response to the drought that negatively impacted pasture and forage areas over the past several years. The production projections for the remainder of major animal proteins are expected to increase as follows: pork, +0.5 percent, broilers, +0.8 percent, turkeys, +5.6 percent, and table-eggs, +5.8 percent. The higher pork production forecast derives from a larger first-half 2023 pig crop and continued modest growth in sow productivity. The modest expected increase in broiler production adds to a decade-long steady growth trend of the industry. The larger changes in turkey and egg production forecasts reflect the expectation of continuing recovery from the 2022 Highly Pathogenic Avian Influenza (HPAI) outbreak. These production forecast increases are expected, in turn, to drive the forecast prices lower: hogs, -0.2 percent, broilers -3.7 percent, turkeys, -2.9 percent, and eggs, -22.8 percent. Milk production is forecast to increase (+1.3 percent), while the all-milk price is forecast to decrease (-9.2 percent). 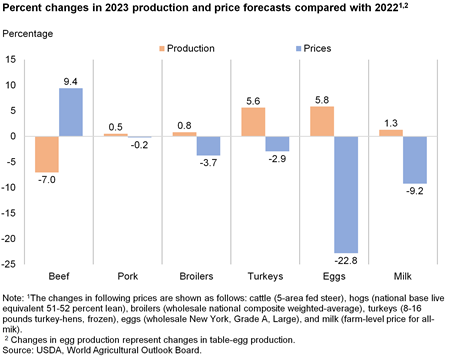