Pork/Hogs: Third-quarter pork production is raised to 6.5 billion pounds, just fractionally below a year ago, on expectations that ample supplies of slaughter-ready hogs for the balance of the quarter will combine with higher year-over-year average dressed weights to increase production. Second-half 2022 pork exports are reduced 80 million pounds on demand weakness for U.S. pork in Asia, aggravated by the appreciated value of the U.S. dollar. Total U.S. pork exports for 2022 are forecast at 6.495 billion pounds, almost 8 percent below export volumes last year.

Less Beef To Offset Increases in Other Meats in 2023

In 2023, U.S. consumers can anticipate greater availability of pork, broiler meat, and turkey, but less beef is expected. The amount used by the domestic market on a per person basis, including in grocery stores and restaurants, is defined as per capita disappearance. USDA calculates per capita meat disappearance—a proxy measure of consumption—as a residual measure of supply (the sum of production, beginning stocks, and imports minus the sum of exports and ending stocks) divided by the total U.S. population. Although per capita disappearance factors in trade, it largely reflects domestic supplies, and it does not account for food waste or use such as pet food.
Total poultry disappearance is projected to be 115.3 pounds per capita, up 1.2 percent in the 11th consecutive year of record broiler production and following the recovery of turkey production from the impact of avian influenza. Red meat disappearance is forecast at 109.5 pounds per capita, down 1.6 percent, as lower beef supplies offset an increase in projected pork production.
The figure below shows the retail weight per capita disappearance for beef, pork, broiler meat, and turkey from 2010 to 2021, with forecast values for 2022 and 2023. Beef per capita for 2023 is expected to decline by almost 3 pounds, while pork is expected to climb about 1 pound per person. Disappearance of broiler meat is projected to increase about half a pound, a slower pace than in previous years, and turkey will rise over 1 pound, the first increase in 7 years. 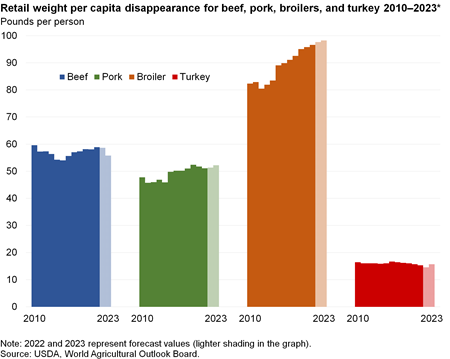