ERS Rural-Urban Continuum Codes distinguish metropolitan (metro) counties by the population size of their metro area, and nonmetropolitan (nonmetro) counties by degree of urbanization and adjacency to metro areas. The Office of Management and Budget’s 2013 metro and nonmetro categories have been subdivided into three metro and six nonmetro groupings, resulting in a nine-part county classification. The codes provide researchers working with county data a more detailed residential classification, beyond a simple metro-nonmetro dichotomy, for the analysis of trends related to degree of rurality and metro proximity. 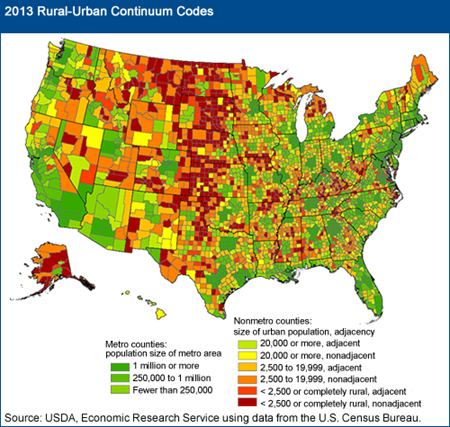 Several nonmetro independent cities in Virginia have been combined with their counties of origin (see the data file for details).

The Rural-Urban Continuum Codes were created in 1975 by David L. Brown, Fred K. Hines, and John M. Zimmer, then of the Economic Research Service, for their report, Social and Economic Characteristics of the Population in Metro and Nonmetro Counties: 1970-80. The codes were updated after the 1980, 1990, and 2000 censuses, with a somewhat more restrictive procedure for determining metro adjacency. The versions based on the 1970, 1980, 1990, and 2000 Censuses are found in the file listing of this data product.

To create the 2013 Rural-Urban Continuum Codes, all U.S. counties and county equivalents were first grouped according to their official metro-nonmetro status, defined by the Office of Management and Budget (OMB) as of February, 2013. OMB determined current metropolitan status by applying population and worker commuting criteria to the results of the 2010 Census and the 2006-10 American Community Survey (ACS). A detailed description of metro area criteria are available in this OMB bulletin.

For the Continuum Codes, metro counties are divided into three categories according to the total population size of the metro area of which they are part: 1 million people or more, 250,000 to 1 million people, and below 250,000. Nonmetro counties are classified along two dimensions. First, they are divided into three urban-size categories (an urban population of 19,999 or more, 2,500 to 20,000, and less than 2,500) based on the total urban population in the county. (A description of urban-rural categories and their relationship to the metro-nonmetro delineation is available on the page What is Rural?) Second, nonmetro counties in the three urban-size categories are sub-divided by whether or not the county is adjacent to one or more metro areas. A nonmetro county is defined as adjacent if it physically adjoins one or more metro areas, and has at least 2% of its employed labor force commuting to central metro counties. Nonmetro counties that do not meet these criteria are classed as nonadjacent.

In concept, the 2013 version of the Rural-Urban Continuum Codes is comparable with that of earlier decades. However, in 2000, OMB made major changes in its metro-area delineation procedures, and the Census Bureau changed the way in which rural and urban are measured. Therefore, the 2013 and 2003 Rural-Urban Continuum Codes are not fully comparable to those of earlier years. OMB's changes added some additional metro areas by no longer requiring that a metro area must have at least 100,000 population if its urbanized area includes no place of at least 50,000 people. More importantly, simplifying the worker commuting criteria that determine outlying metro counties had the effect of adding numerous new outlying counties to metro areas while deleting a smaller number that were previously defined as metro.

No major changes were made in either the metro-nonmetro or urban-rural criteria between 2000 and 2010. However, the decennial census long form was eliminated in 2010 and OMB used 5-year average commuting flow data from the 2006-10 American Community Survey (ACS)  rather than a point in time estimate to delineate metropolitan and micropolitan areas. The 2006-10 ACS commuting flow data was also used to compute adjacency for the Rural-Urban Continuum Codes.

The Rural-Urban Continuum Codes were first released in 1975 and are updated every 10 years after the release of the decennial census data. See details on the previous releases:

This document was prepared May 2013. In December 2020, codes were assigned to the U.S. Census Bureau-designated county-equivalent areas of the Virgin Islands and other inhabited island territories, and this documentation was revised to reflect that addition.