Small population size and geographic remoteness bestow highly-cherished benefits for residents and visitors alike, but those same characteristics often create economic and social challenges. Job creation, population retention, and provision of services (such as groceries, health care, clothing, household appliances, and other consumer items) require increased efforts in very rural, remote communities, all things being equal. Recent research indicates that the demographic and economic penalties associated with small size and remoteness may be increasing. ERS has developed ZIP-code-level frontier and remote area (FAR) codes to aid research and policymaking. This version is based on 2010 Census population data and urban area boundaries. It updates the original ERS data product based on 2000 data. It includes four FAR level codes, based on different population thresholds that are meant to reflect likely access to high order services (level one), low order services (level four), and intermediate order services (levels two and three).

The maps below are also available in PDF format, which allows for zooming into an area for greater detail. 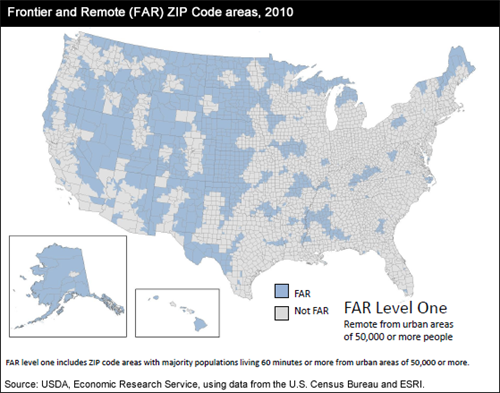 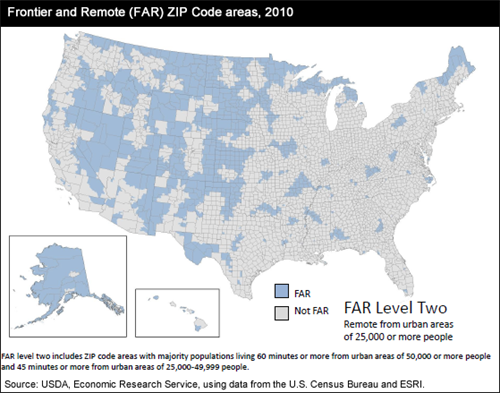 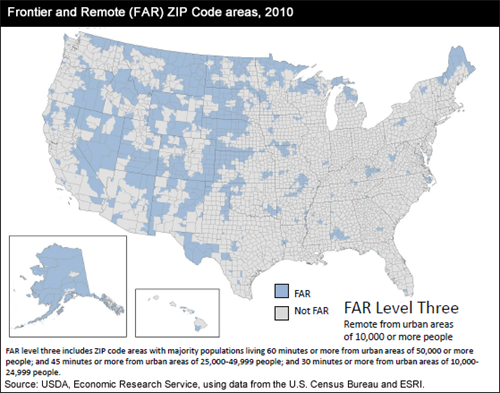 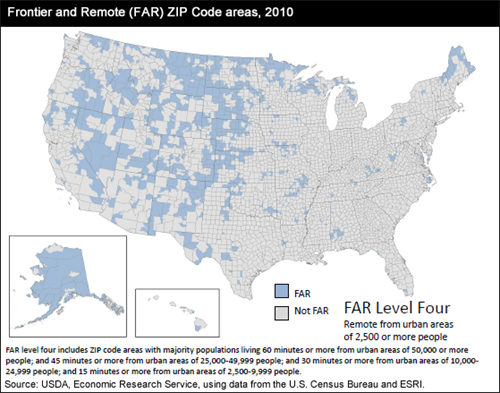 FAR areas were defined and adjusted along two dimensions:

What Geographic Units Should Be Used to Represent Urban Areas?

This study uses Census Bureau-defined Urban Areas (from the 2010 Census) to represent urban entities around which frontier areas will be identified. They are nationally-consistent, statistically-derived versions of the built-up areas of towns and cities, based strictly on population density and not on municipal boundaries.

Urban Areas (UAs) range in size from 2,500 up to 18.4 million people. Census defines rural areas as all territory outside UAs; 59 million people lived in rural areas in 2000—19 percent of U.S. population. In this analysis, FAR areas are defined in relation to the time it takes to travel by car to the edges of nearby UAs that are above the chosen population-size category.

At What Geographic Level Should Remoteness (Distance to Urban Areas) Be Measured?

Travel times to the edges of UAs were measured at the ½ x ½ kilometer grid level, using routing algorithms applied to a road network that included posted speed limits for all federal, state, county, and municipal roads. Population data from the 2010 Census was translated to the grid network from census blocks using areal interpolation.

A key methodological innovation allowed with this approach is the ability to apply longer travel-time bands around larger UAs. The qualifying travel time (beyond which areas are considered to be frontier and remote) should be longer around larger UAs, because people tend to travel farther and less frequently for high-order services. For every grid cell, we calculate travel times to nearby UAs in the four population-size groups listed above, thus we can apply longer travel-time bands to larger population-size groups:

How Are Results Aggregated to Larger, More Useful Geographic Entities?

U.S. populations living in ZIP Code areas designated as frontier and remote ranged from 12.2 million for level one down to 2.3 million for level four in 2010. Five States (Connecticut, Delaware, New Jersey, Ohio and Rhode Island) and the District of Columbia contained no FAR territory. States with the highest shares of FAR populations were Wyoming, Montana, North Dakota, South Dakota, and Alaska.

Originally released in June 2012, the 2000 FAR codes use the same methodology as the 2010 codes, using the 2000 Census Bureau UAs. They did not, however, have the level of detail in road networks to estimate travel time, and were not done for Alaska and Hawaii.