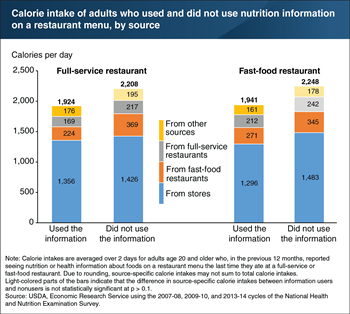 As part of the National Health and Nutrition Examination Survey (NHANES), respondents are asked whether they have seen nutrition or health information about foods on restaurant menus and, if so, whether they used that information to decide what to order. An ERS analysis of NHANES data from 2007-14 reveals that adults who reported seeing and using information on a full-service or a fast-food restaurant menu consumed 284 or 307 fewer calories per day, respectively, than did adults who reported seeing but not using the information—a calorie intake gap that is 14-15 percent of a 2,000-calorie reference diet. In full-service restaurants, wait staff take consumers’ orders for food from their tables and consumers pay after the meal is eaten. In fast-food restaurants, consumers order and pay for food from a counter before eating. The energy intake gaps between information users and nonusers can be attributed to differences in calories obtained from various sources, including grocery stores, supermarkets, and other stores. For instance, fast-food restaurant menu label users consumed 271 and 1,296 calories per day from fast-food restaurants and from stores, respectively, while nonusers consumed 345 calories per day from fast-food restaurants and 1,483 from stores. The statistics for this chart are from the ERS report, The Association Between Restaurant Menu Label Use and Caloric Intake, released on October 31, 2018.