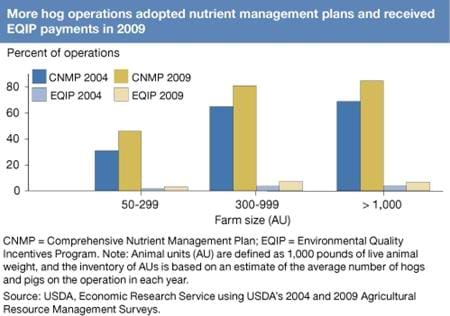 Federal Clean Water Act regulations provide an incentive for large livestock operations to adopt a comprehensive nutrient management plan (CNMP). A CNMP is a set of conservation practices and management activities designed to match crop nutrient needs to applications so that as few nutrients as possible are lost to the environment. The USDA's Environmental Quality Incentives Program (EQIP) helps defray the costs of meeting environmental regulations by partially funding the planning, installation, and maintenance of conservation practices. Between 2004 and 2009 the share of hog operations that had a CNMP and the share that received EQIP payments increased. This chart comes from the December 2011 issue of Amber Waves magazine. 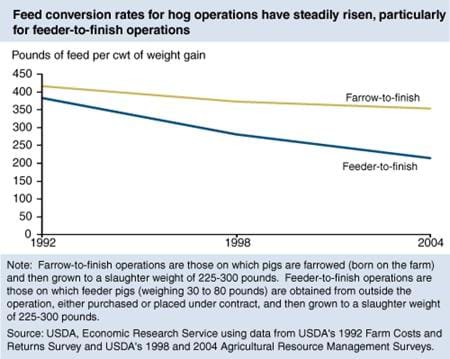 The average quantity of feed required per hundredweight of gain declined 44 percent for feeder-to-finish hog operations between 1992 and 2004. Most feeder-to-finish operations operate under production contracts. Contractors typically bear the cost of supplying feeder pigs and feed to the farming operation, so they may invest in genetic improvements in the animals and improved feed formulations to reduce their costs. And since contracts allow farmers to specialize in the grow-out phase of the production process, they have more often adopted practices that further increase feed efficiency, such as grouping pigs by age and weight so feed rations can be formulated for each pig's specific needs. In contrast, the average feed conversion rate on farrow-to-finish hog operations-which are less likely to have production contracts and are less specialized-declined by only 15 percent in 1992-2004. This chart is found in the December 2011 issue of Amber Waves magazine. 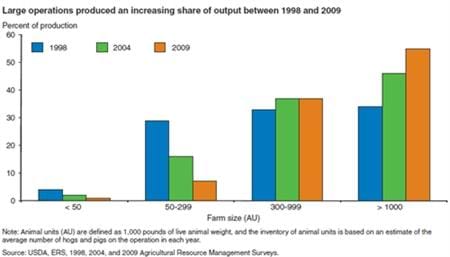 Between 1998 and 2009, the total number of hog operations fell by about 60 percent, and the average inventory grew from 2,589 to 7,930 head. Over this period, the number of hog operations producing fewer than 300 animal units declined rapidly, resulting in a shift in production to larger operation. In 2009, over half of all hog production occurred in operations with 1,000 or more animal units. This chart is from Trends and Developments in Hog Manure Management: 1998-2009M, EIB-81, September 2011. 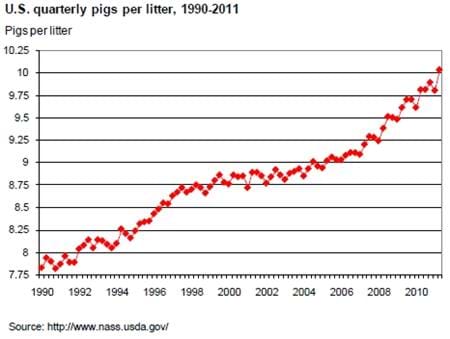 U.S. hog producers broke through the 10-pigs-per litter barrier in the March-May 2011 quarter, according to the latest count. Averaging 10.03 pigs per litter, the U.S. hog production industry is now positioned to possibly eliminate Canadian hog producers' longstanding litter-rate lead. U.S. litter rates have trended upward for more than two decades due to widespread adoption of technologies that have improved animal handling procedures, breeding methods, and nutritional composition. Technological innovations contributing to larger litters, superior survival rates, and improved weaned-pig numbers are both a cause and a consequence of the hog industry's move from a very large number of small operations to a relatively small number of very large, specialized operations. This graph appears in Livestock, Dairy, and Poultry Outlook, LDP-M-205, July 18, 2011. 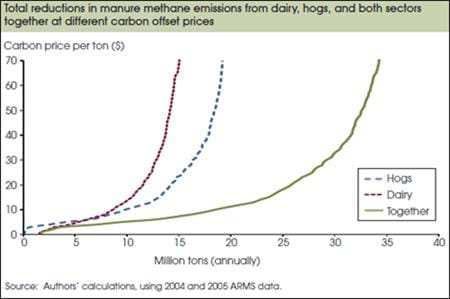 Methane digester systems capture methane from lagoon or pit manure storage facilities and use it as a fuel to generate electricity or heat. In addition to providing a renewable source of energy, digesters can reduce greenhouse gas emissions and provide other environmental benefits. Methane digesters have not been widely adopted in the United States mainly because the costs of constructing and maintaining these systems have exceeded the value of the benefits provided to the operator. But policies to reduce greenhouse gas emissions could make such biogas recovery facilities profitable for many livestock producers. Without a carbon market (when the price is zero), no hog and few dairy operations find it profitable to adopt a digester. As the carbon price increases, more operations adopt digesters, lowering emissions. At a carbon price of $13, greenhouse gas emissions could be reduced by 9.8 and 12.4 million tons (carbon dioxide equivalent) for the dairy and hog sectors, respectively. This amounts to reductions of 61-62 percent of manure-generated methane in these sectors. A doubling of the carbon price to $26 could cause manure-based methane emissions from dairy and hogs together to be reduced by 78 percent. This chart was originally published in Carbon Prices and the Adoption of Methane Digesters on Dairy and Hog Farms, EB-16, February 2011.