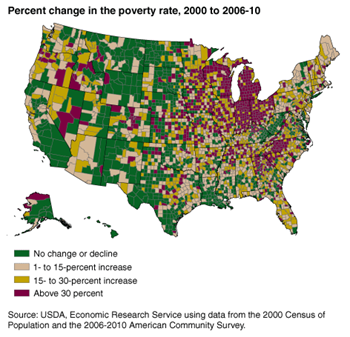 Mapping frontier and remote areas in the United States 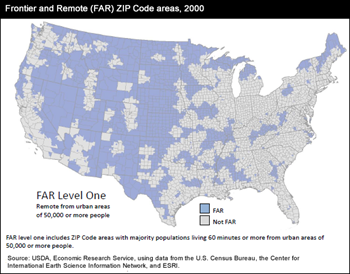 Population retention, job creation, and acquisition of goods and services often require increased effort in very rural, remote U.S. communities. ERS has developed a set of frontier and remote (FAR) area codes to aid research and policymaking on such communities. The initial version classifies ZIP code areas and includes four FAR level codes, based on different population and travel-time thresholds. The levels are meant to reflect likely access to various levels of public and private services. Level one-shown on the map-identifies areas lacking easy access to services commonly provided in large urban centers, such as advanced medical procedures, major household appliances, regional airport hubs, or professional sports franchises. Other levels identify increasingly remote areas of the country that may lack easy access to even basic services, such as grocery stores, gas stations, and basic health-care. The map is from the Frontier and Remote Area Codes data product on the ERS website, updated June 1, 2012.