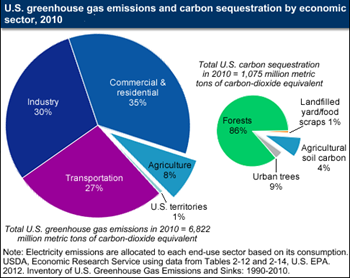 Agriculture (including on-farm energy emissions) accounted for about 8 percent of U.S. greenhouse gas (GHG) emissions in 2010. Since farm production represents about 1 percent of total U.S. gross domestic product (in real gross value-added terms), the sector is relatively GHG-intensive. In all U.S. sectors except agriculture, the largest contributor to GHG emissions is fossil fuel combustion for energy. In agriculture, crop and livestock activities are unique sources of nitrous oxide and methane emissions, notably from soil nutrient management, enteric fermentation (a normal digestive process in animals that produces methane), and manure management. These emissions dominate the contribution of energy related emissions in the sector. The land-based activities of agriculture—as well as forestry—also have the unique capacity to withdraw (“sequester”) carbon dioxide (CO2) from the atmosphere and store it in soil and biomass sinks through activities such as no-till on cropland or land use change from croplands to grasslands. EPA estimates that U.S. carbon land-sinks offset close to 15.8 percent of total U.S. emissions in 2010. Agriculture provided 4 percent of U.S. sinks in 2010. This chart updates one found in the ERS report, Economics of Sequestering Carbon in the U.S. Agricultural Sector, TB-1909, March 2004. 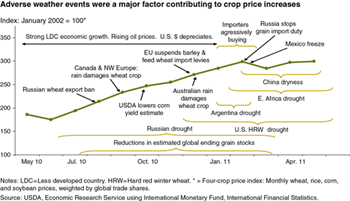 As is typical in periods of significant increases in food commodity prices, weather effects on agricultural production were a major factor that contributed to price increases in 2010-11. A series of adverse weather events were compressed into 10 months, beginning in June 2010. Weather around the world was too dry, too wet, too hot, or too cold, sharply reducing expectations for 2010 global crop production and stock levels, which resulted in higher prices. Similar production-reducing weather events occurred prior to the 2008 price peak, but they were spread over a 3-year period (2005-07). Consequently, expectations for world crop production dropped more quickly after June 2010 than during the 2005-07 price increases. On the demand side, consumption of grains and oilseeds continued to rise. As a result, global stocks of aggregate grains and oilseeds declined and prices began to rise rapidly. This chart appeared in the September 2011 issue of ERS's Amber Waves magazine. For more information on the 2012 drought, visit U.S. Drought 2012: Farm and Food Impacts information page in the ERS Newsroom. 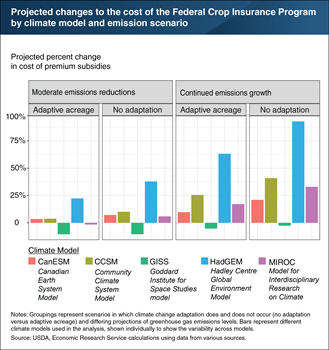