Family farms—whether using the ERS definition based on majority ownership of the farm business or the Food and Agriculture Organization (FAO) definition based on the predominance of family-supplied labor—account for a large share of U.S. agricultural production. However, their relative production within commodity groups varies. Family farms were particularly important in the production of major field crops (corn, cotton, soybeans, and wheat), where they accounted for 62-96 percent of U.S. production in 2011, and in hogs, poultry, and eggs, where they accounted for 68-96 percent of production. Family farm production shares are lower in every major commodity category when focusing on the share of farms where the principal operator and spouse provide most of the labor used on the farm (the FAO standard). Large farms, often family owned but heavily reliant on hired farm labor and contract service providers, account for a large share of U.S. production, particularly in high-valued crops (fruit, nuts, vegetables, and nursery) and dairy. For example, family-owned and operated farms account for 75 percent of dairy production, but the operator and spouse usually provide less than half the labor on those farms. This chart can be found in “Family Farming in the United States” in the March 2014 Amber Waves. The United Nations (UN) has designated 2014 the “International Year of Family Farming” with a primary focus on small farms that depend on a family for most labor. While farms in the United States are often much larger than the farms in developing countries that are the primary focus of the UN’s efforts, most U.S. farms are family businesses that rely primarily on family labor. Large U.S. family farms are more likely to rely on partners and on hired and contract labor than smaller farms, so the share of labor provided by the principal operator and spouse falls as farms get larger. On average, a farm’s principal operator and spouse contribute more than 50 percent of the farm’s labor until farm sales reach $1 million or more. That share is an average of 42 percent for farms with $1-$5 million in sales, and falls to 21 percent among farms with $5 million or more in sales. Farms reliant primarily on the labor of the operator and spouse account for nearly half of U.S. farm production. This chart can be found in “Family Farming in the United States” in the March 2014 Amber Waves.

Agriculture and its related industries provide 9.2 percent of U.S. employment In 2012, 16.5 million full- and part-time jobs were related to agriculture—about 9.2 percent of total U.S. employment. Direct on-farm employment provided over 2.6 million of these jobs. Employment in the related industries supported another 13.9 million jobs. Of this number, food services and drinking places accounted for the largest share—10.8 million jobs—and food manufacturing supported 1.5 million jobs. The remaining agriculture-related industries together supported another 1.5 million jobs. This chart appears in ERS’s data product, Ag and Food Statistics: Charting the Essentials, on the ERS website.

Close to 7 cents of the U.S. food dollar is value added by U.S. farms 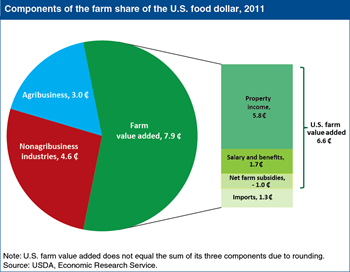 For a typical dollar spent in 2011 by U.S. consumers on domestically produced food, 15.5 cents represents the farm share, or value added at the farm gate. The farm share includes the value added by the farmer; services and supplies from agribusinesses; and farm-level inputs from nonagribusiness industries. For example, the energy industry supplies natural gas to agribusinesses producing nitrogen fertilizers used on U.S. farms, and the finance and insurance industry supplies financial services to U.S. farmers. Nonagribusiness industries accounted for 4.6 cents of the farm share in 2011, and agribusinesses added 3.0 cents of value. From the remaining 7.9 cents of farm value added, 6.6 cents was produced on U.S. farms and 1.3 cents represents imported farm commodities purchased as inputs by U.S. producers. Most of the farm value added represents property income accruing to the farmers who own the farm operations. Salaries and benefits for hired farmworkers amounted to 1.7 cents. Net farm subsidies from the Government lowered farm commodity costs per food dollar by about 1 cent in 2011. This chart appears in “ERS Food Dollar Series Allows an Indepth Look at Farm-Level Components of the U.S. Food Dollar” in the July 2013 issue of Amber Waves magazine. During 2006-10, hired farm labor accounted for 17 percent of variable production expenses in U.S. agriculture as a whole, but for much higher shares of expenses in more labor-intensive sectors, such as vegetables (35 percent), nursery products (46 percent), and fruit (48 percent). The farm labor situation is complicated by the fact that many U.S. farmworkers lack the immigration status needed to work legally in this country. Analysis of the U.S. Department of Labor's National Agricultural Workers Survey indicates that over the past decade, about half of the hired workers employed in U.S. crop agriculture were unauthorized (similar information is not available for the livestock sectors). Efforts to stem the flow of illegal immigrants and tighten enforcement of employee documentation requirements will likely have widely varying impacts on the supply of farm labor depending on what is grown, as well as the size and location of the farming operation. This chart is found in “Immigration Policy and Its Possible Effects on U.S. Agriculture” in the June 2012 Amber Waves.

Hired farmworkers lacking authorization are particularly important for some crops Hired farmworkers make up less than 1 percent of all U.S. wage and salary workers, but play an essential role in U.S. agriculture. In 2012, some 1.1 million hired farmworkers were employed on U.S. farms, according to USDA’s Farm Labor Survey. The U.S. Department of Labor’s National Agricultural Workers Survey provides information about the immigration status of hired crop farmworkers but does not cover the livestock sector, for which no similar data are available. Of those crop workers surveyed between 2007 and 2009, 71 percent were foreign-born (67 percent in Mexico and 4 percent elsewhere). Forty-eight percent of all hired crop workers surveyed, and over 60 percent of those surveyed in the fruits/nuts and vegetable sector, indicated that they were not legally authorized to work in the United States. This chart is based on data from Immigration and the Rural Workforce, in the ERS Newsroom, updated May 2013. 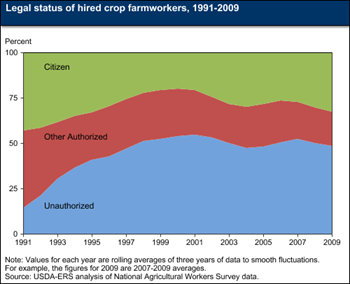 Hired farmworkers make up less than 1 percent of all U.S. wage and salary workers, but they play an essential role in U.S. agriculture, particularly in labor intensive crops such as fruits, vegetables, and nursery products. The U.S. Department of Labor's National Agricultural Workers Survey (NAWS) is the only national survey that ascertains the legal status of noncitizen farmworkers, but it is limited to hired crop farmworkers and excludes hired livestock farmworkers. Based on NAWS data, the share of hired crop farmworkers who were not legally authorized to work in the U.S. grew from roughly 15 percent in 1989-91 to almost 55 percent in 1999-2001. Since then it has fluctuated around 50 percent: the figure was 48 percent on average for 2007-2009 (the latest data available). This chart is found in the Farm Labor topic on the ERS website, updated February 2013.

Quantity of agricultural laborers in Brazil is on the decline Hired farmworkers include field crop workers, nursery workers, livestock workers, farmworker supervisors, and hired farm managers. Hired farmworkers make up less than 1 percent of all U.S. wage and salary workers, but they play an essential role in U.S. agriculture. In 2010, the Current Population Survey (conducted by the Census Bureau) estimated average hired farm employment at 755,000. Of these farmworkers, 62 percent work in crop agriculture, and the remaining 38 percent work in livestock. Roughly 37 percent of all hired farmworkers live in the Southwest (defined to include California), and 24 percent live in the West region. Two States--California and Texas--account for more than one-third of all farmworkers. More farmworkers are located in metropolitan areas (59 percent) than in nonmetro counties. In California, 99 percent of farmworkers are located in metro areas, and in Washington State the figure is 95 percent. This chart is from the Farm Labor topic page on the ERS website. 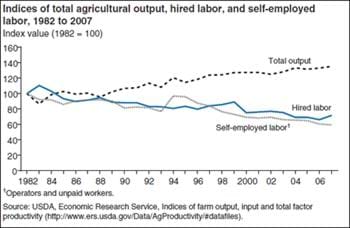 Hired and operator labor has trended downward in recent years, even as farm output has increased. By 2007, farming used 30 percent less hired labor and 40 percent less operator (and unpaid) labor than in 1982, while farm output was 35 percent higher than in 1982. About two-thirds of the growth in output per hour of work came from growth in total factor productivity-as farmers adopted technological change, such as biotechnology, improved animal husbandry, improvements in machinery and chemicals, and more efficient farm size/organization. This chart comes from the ERS report, The Changing Organization of U.S. Farming, EIB-88, December 2011.

Real wage rates for farmworkers vs other nonfarm workers Average hourly earnings of non-supervisory farm laborers stood at $10.22 in 2010, compared to $19.07 for private sector nonsupervisory workers outside of agriculture. In real terms, farm labor wages have risen at about 0.9 percent per year since 1990, compared to 0.6 percent per year for nonfarm nonsupervisory workers. The 2010 wage for farm laborers is comparable to the average wage for maids and housekeepers ($10.17), but lower than the wage for landscaping and groundskeeping workers ($12.23) or for construction laborers ($16.15), according to data from the Bureau of Labor Statistics' Occupational Employment Statistics program. This chart appeared on the ERS website, in Farm Labor, updated in July 2011.

Farm employment has increased in the last two years Hired farmworkers include field crop workers, nursery workers, livestock workers, farmworker supervisors, and hired farm managers. The average number of hired farmworkers has steadily declined over the last century, from roughly 3.4 million to just over 1 million. Because the U.S. labor force grew, agricultural employment as a proportion of total employment has declined even more sharply. According to the Farm Labor Survey, the annual average number of people employed as hired farmworkers, including agricultural service workers, decreased from 1,142,000 in 1990 to 1,053,000 in 2010. But, the survey also showed that average farm employment in 2010 was above 2007 levels. Employment is highly seasonal: in January of 2010, there were 802,000 workers, while in July the figure stood at 1,245,000. This chart appeared on the ERS website, in Farm Labor, updated in July 2011.