Seafood was one of the least consumed protein foods in 2014 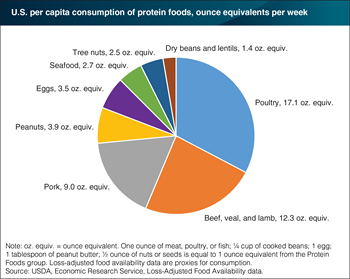 Seafood (fish and shellfish) is a nutrient-rich source of dietary protein which is relatively low in calories and saturated fat compared to some other protein sources. The 2015-2020 Dietary Guidelines for Americans recommends that Americans eat a variety of protein foods, including at least two servings of seafood per week. According to ERS loss-adjusted food availability data, Americans consumed about 2.7 ounces of fish and shellfish per person per week in 2014, about one-third of the 8-ounce weekly minimum recommended for an average 2,000-calorie diet. Consumers’ appetites for fish and shellfish lagged behind most other foods in the protein group. Seafood demand may be limited by a number of factors, including a lack of awareness about the health benefits of seafood, inexperience with cooking methods and recipes, higher retail prices on average when compared with meat and poultry, and concerns about food safety and mislabeling of imported seafood products. This chart appears in “Americans’ Seafood Consumption Below Recommendations” in the October 2016 issue of ERS’s Amber Waves magazine.