Smaller gatherings may have meant smaller turkeys on the Thanksgiving table 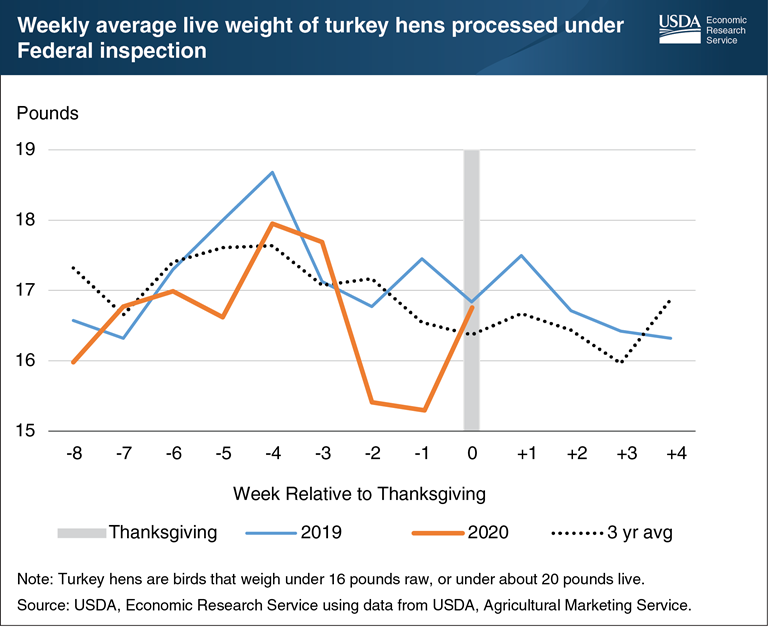 Errata: On December 11, 2020, text was updated to distinguish that preliminary data was used in the chart and that official November turkey weight data is forthcoming.

Expectations that people will gather in smaller groups for the holidays this year may have resulted in increased demand for smaller turkeys for Thanksgiving tables. However, the industry may not have been able to fulfill that change in consumer demand in time for the food-centered holiday. For turkeys to be grown in time for Thanksgiving, they must have been hatched in August or earlier. As a result, the reaction to changing demand can be delayed. Stocks of frozen turkeys build up all year long in preparation for the seasonal spike in demand, so many of the birds that were for sale in grocery stores around Thanksgiving were processed even earlier in the year. Even so, preliminary data in the weeks that led up to Thanksgiving suggested that the average live weight of turkey hens processed was below last year’s average. Birds that classify as turkey hens are those that weigh fewer than 16 pounds raw or fewer than about 20 pounds live. Official data for November turkey weights will be released by USDA’s National Agricultural Statistics Service in late December. This chart is drawn from Economic Research Service’s Livestock, Dairy, and Poultry Outlook, November 2020.