U.S. apple production is forecast to decline 3 percent in 2020 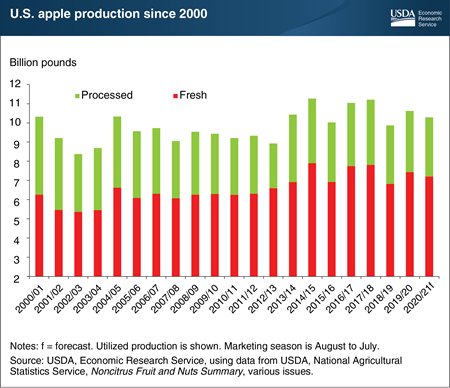 The holidays may look a little different this year, but apple pie is likely still on the table. The U.S. apple crop in the 2019/20 season (August to July) was the sixth largest on record, with total production reaching 11 billion pounds. Total utilized production, which includes production that is actually sold, was 10.6 billion pounds. In June 2020, apples in storage hit a record high of 47.9 million bushels, up 24 percent from the same time last year. The increase in domestic supplies received a further boost by a decrease in U.S. exports stemming from high tariffs from India and China. This overall increase in supplies led to lower grower prices in 2019/20. For the 2020/21 season, total production is projected 3 percent lower than the prior season (total utilized production is estimated at 10.3 billion pounds), with production in Washington, the Nation’s leading apple producer, similarly down 3 percent. The quantity of apples harvested may be even lower because of labor supply uncertainties surrounding the pandemic. Apples for the processed market are also expected to decrease, notably in Pennsylvania (17 percent) and Virginia (16 percent). Bagged apples, however, are currently in demand and are likely to stay in demand for apple pie season. This chart is based on the ERS Fruit and Tree Nuts Outlook, released September 2020.