Despite locust outbreak, grain production in most acutely affected African countries set to be highest on record 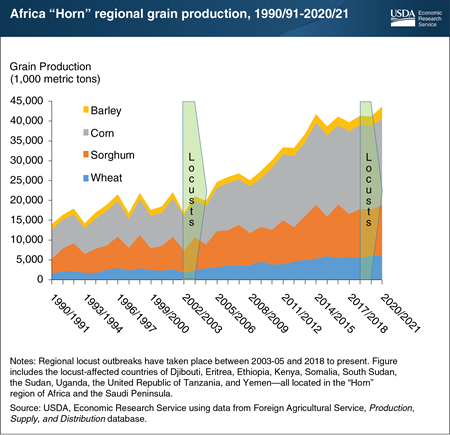 Several countries in the “Horn” region of Africa are facing the brunt of what the U.N. Food and Agricultural Organization (FAO) describes as the “worst desert locust crisis in 25 years.” Paradoxically, grain production in those countries is forecast to hit record volumes. The current desert locust outbreak originated in mid-2018 when successive rain events in the arid Arabian Desert spurred vegetation development. The latter, in turn, provided ample feedstock for the burgeoning locust population. Trade winds blew the pests into Africa in early 2019, where the locusts settled into the low-elevation arid to semi-arid grasslands. Regionally abundant rainfall through the end of 2019 and into 2020 supported vegetation growth, which once again aided in the expansion of locust swarms. However, the locusts primarily remained in low-elevation grasslands, largely avoiding the higher-elevation grain production zones. Further, the rainfall that increased feedstock for the locusts also helped increase yields for agricultural crops, such as corn, barley, sorghum, and wheat. Ultimately—and despite a significant locust infestation—grain production in this region is forecast not only above the 2019 levels but also to reach the highest level on record. This situation mirrors that of the less severe locust infestation of 2003-05, during which aggregate grain production rose during the height of the outbreak. This chart is drawn from material included in the Economic Research Service’s Wheat and Feed Outlook reports from August 2020, and has been updated with November data.