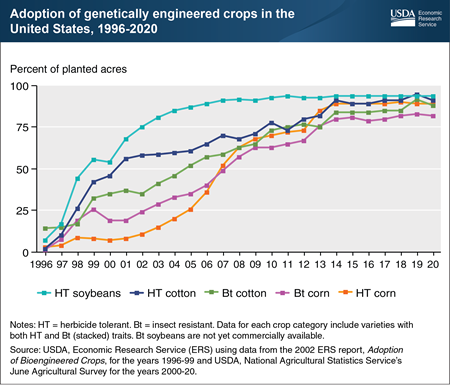 Genetically engineered (GE) seeds were commercially introduced in the United States for major field crops in 1996, with adoption rates increasing rapidly in the years that followed. Currently, more than 90 percent of U.S. corn, upland cotton, and soybeans are produced using GE varieties. Most of these GE seeds are herbicide tolerant (HT), insect resistant (Bt), or both (stacked). The share of U.S. soybean acres planted with HT seeds rose from 7 percent in 1996 to 68 percent in 2001, before plateauing at 94 percent in 2014. Bt soybeans are not yet commercially available. HT cotton acreage expanded from approximately 10 percent in 1997 to a high of 95 percent in 2019. Adoption rates for HT corn grew relatively slowly at first, but then plateaued at 89 percent in 2014. Meanwhile, the share of Bt corn acreage grew from approximately 8 percent in 1997 to 82 percent in 2020. Increases in adoption rates for Bt corn may be due to the commercial introduction of new varieties resistant to the corn rootworm and the corn earworm. Bt cotton acreage also expanded, from 15 percent of U.S. cotton acreage in 1997 to 88 percent in 2020. This chart appears in the Economic Research Service data product, Adoption of Genetically Engineered Crops in the U.S., updated July 2020.