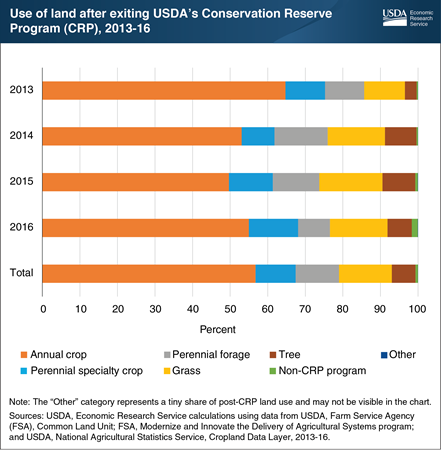 Between 2013 and 2016, contracts for about 7.6 million acres of land enrolled in USDA’s Conservation Reserve Program (CRP) expired. About 2.76 million acres of expiring land reenrolled in the CRP. Of the almost 4.89 million acres that exited the program during the period, 57 percent transitioned to annual crop production. At least half of the exiting CRP land transitioned to annual crop production in each of the four years. The most common annual crops grown on expired CRP land were soybeans (21 percent of the exiting CRP land that went into annual crop production), corn (16 percent), and wheat (16 percent). Perennial forage (such as alfalfa) and specialty crop (such as pecans) production accounted for 12 and 11 percent, respectively. Taken together, 79 percent of former CRP land was put to some type of crop production (annual, perennial forage, or perennial specialty) after exiting the program. The remaining exiting land was most often used as grass cover (14 percent) or tree cover (6 percent). Post-CRP acreage under grass cover may be used as pastureland or represent acres that are untouched after expiring from a grassland practice in CRP. This chart appears in the December 2019 ERS report, The Fate of Land in Expiring Conservation Reserve Program Contracts, 2013-2016.