Prevalence of U.S. food insecurity in 2019 dipped below pre-Great Recession level for the first time 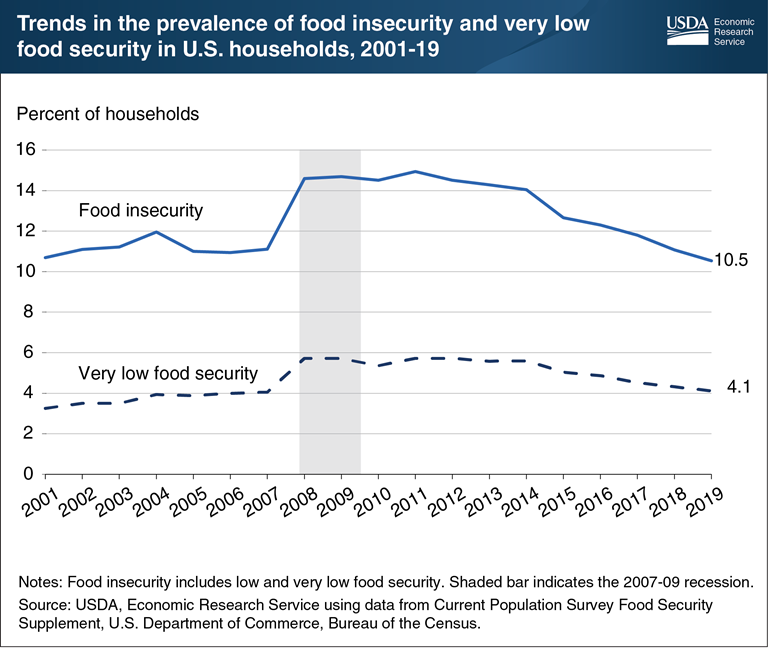 USDA’s Economic Research Service (ERS) monitors the food security status of households in the United States through an annual nationwide survey. The most recent survey contains data collected in December 2019 for the year that preceded the COVID-19 pandemic. In 2019, 89.5 percent of U.S. households were food secure, meaning they had access at all times to enough food for an active, healthy life for all household members. The remaining households (10.5 percent) were food insecure at least some time during the year, including 4.1 percent that experienced very low food security. In households with very low food security, the food intake of one or more household members was reduced and their eating patterns were disrupted at times because the household lacked money and other resources for obtaining food. The 2019 prevalence of food insecurity, at 10.5 percent, was below the 2018 prevalence of 11.1 percent; it continued to show a decline from a high of 14.9 percent in 2011 and was significantly below the 2007 pre-Great Recession level of 11.1 percent. The prevalence of very low food security was not significantly different in 2019 from in 2018, 4.1 percent compared to 4.3 percent, respectively. This chart appears in ERS’s report, Household Food Security in the United States in 2019, released September 9, 2020.