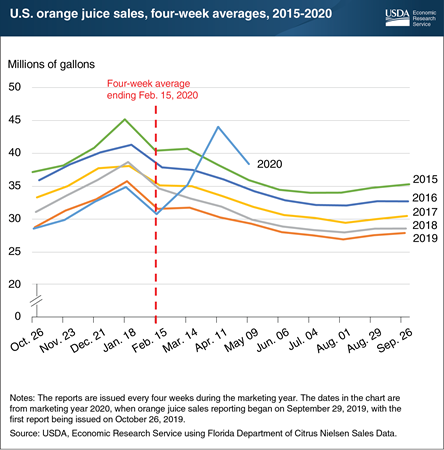 Retail orange juice sales have been falling in the United States each year since 2010, but during the U.S. onset of the current COVID-19 pandemic, sales for orange juice rose. One reason for the increase is that U.S. consumers may have sought methods to increase their intake of vitamin C, a nutrient commonly believed to build up a healthy immune system, and orange juice sales during the four weeks leading up to April 11, 2020 subsequently reached the highest level in five years at 44.5 million gallons. The average price of frozen concentrate orange juice in April rose 5 percent from the previous month to $2.40 per 12 oz. can, the first March-to-April increase in sales price observed since 2012. In 2019, orange juice consumption in the United States had fallen to 2.25 gallons per capita, a 40 percent decline from 2010. The decrease in orange juice purchases is attributable to both demand and supply-side factors. Research has indicated that declining consumer interest in sugary beverages may be contributing to reduced purchases. On the supply side, citrus greening disease, an insect-borne illness, has decimated the Florida orange juice industry, decreasing bearing acreage of juice oranges by 30 percent since 2005. After their surge in April, sales of orange juice already are showing signs of retreating but are still well above average sales for this time of year. This chart is based on the March 2020 Fruit and Tree Nuts Outlook and updated with Florida Department of Citrus A.C. Nielsen Sales data.