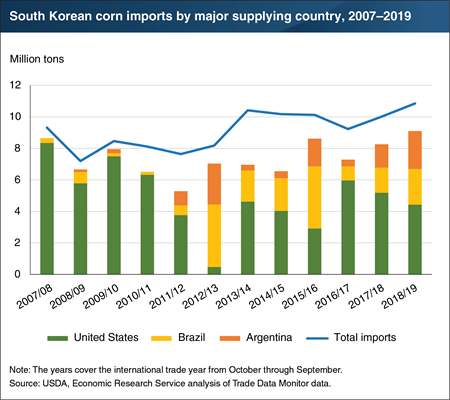 Since 2010, the United States has been losing its dominant position as a corn import supplier to South Korea. Although Mexico is the largest foreign market for U.S. corn, before 2011 South Korea was a large and stable purchaser. However, the U.S. share in South Korea’s corn imports has dropped from 84 percent during the years of 2007-2011 to 46 percent during 2015-2019. In 2012, drought in the United States contributed to the loss in its corn export share vis-à-vis South Korea (and the entire world market) in that year. Yet, the main reason for the decline in U.S. corn export share with South Korea since 2012 has been that the amount of corn supplied by export competitors—in particular, Brazil and Argentina—has risen as large crops in those countries increased their price competitiveness (with some annual fluctuation). South Korea is a very price-sensitive grain importer, and Brazil and Argentina have been supplying corn at attractively low prices. The U.S. loss of corn import share in South Korea is part of a general trend of declining U.S. corn export share in the world, despite higher global corn trade and slightly growing U.S. corn production. This chart was previously published in the ERS Feed Outlook report released in January 2020.