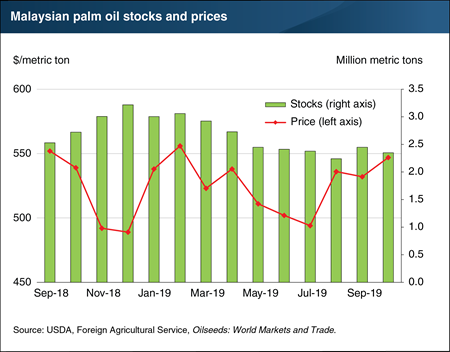 Palm oil is the world’s most widely consumed vegetable oil, used for a multitude of edible goods as well as for industrial applications, including biodiesel. Production of palm oil is dominated by the two top producers—Indonesia and Malaysia. Rising consumption of palm oil by major producing countries and falling output of vegetable oil by major importers, including India, China, and the European Union, have led to recent price increases for Malaysian palm oil. By October 2019, Malaysian prices had climbed to a 13-month high, and further price strengthening is possible next year. In addition to increased demand, palm oil supply and stocks are projected lower due to slowing production. For Malaysia, USDA lowered its estimate of palm oil production for October 2019 through September 2020 to 21 million metric tons. The reduction can be tied to Malaysian rainfall over the last 12 months being significantly below average, which can adversely affect palm oil yields for up to a year. A slower rise in palm oil output coincided with decisions by the Indonesian and Malaysian governments to increase the percentage that biodiesel must comprise in the total fuels supply. Starting in 2020, Malaysia will double its biodiesel requirement to 20 percent. This chart appears in the ERS Oil Crops Outlook newsletter released in November 2019.