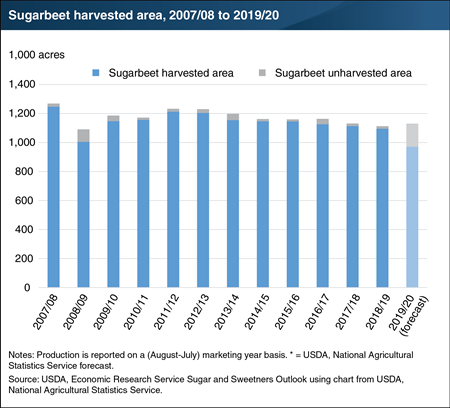 The 2019/20 sugarbeet crop (which operates on an August-to-July crop year) was significantly affected by poor weather during the harvest season. Cold and wet conditions resulted in frozen ground in many regions—particularly in the major-producing States of Minnesota and North Dakota. Sugarbeets had to be left in the ground, unharvested, as equipment could not dig into the frozen soil to harvest this root vegetable, and many that were harvested late in the season were damaged and deemed unsuitable for processing. According to USDA’s National Agricultural Statistics Service’s (NASS) November 1 forecast, 14 percent of planted sugarbeet acreage is expected to go unharvested. In a typical year, 1.5 percent to 3.5 percent of the crop goes unharvested. The reduction in sugarbeet production accounts for a 5-percent decline in expected domestic sugar production, compared with October USDA forecasts. This chart is based on data in the ERS Sugar and Sweeteners Outlook released in November 2019.