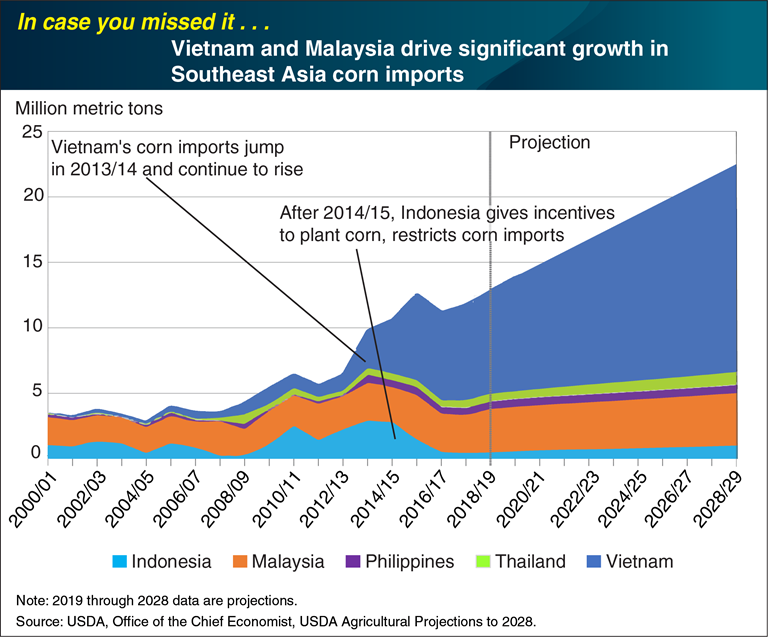 Southeast Asia’s expanding population and increasing incomes, urbanization, and retail sectors are contributing to rising meat consumption and growing imports of feedstuffs. In addition to soybean meal, corn is a significant ingredient in animal feed, and corn imports are of growing importance to the region. USDA projects that Southeast Asia’s corn imports will grow by 8.7 million metric tons between the 2018/19 and 2028/29 marketing years to reach 22.9 million metric tons by 2028/29. Most of the growth is driven by Vietnam and Malaysia, the fastest growing corn-importing countries in the region. Malaysia produces almost no corn and relies exclusively on imports to meet the feed needs of its steadily growing poultry and egg industries. Vietnam has quickly grown into the largest corn importer in the region, importing 9.5 million metric tons in 2018/19. Since 2012, Vietnam has moved from the 19th-largest corn importer in the world to the 5th largest. Imports are projected to continue to rise and reach 14.9 million metric tons by 2028. In contrast to the growth seen in Malaysia and Vietnam, Indonesia’s corn imports have contracted since 2014/15 due to Government policies aimed at encouraging domestic corn production. This chart appears in the April 2019 Amber Waves article, “Southeast Asia’s Growing Meat Demand and Its Implications for Feedstuffs Imports.” This Chart of Note was originally published April 8, 2019.