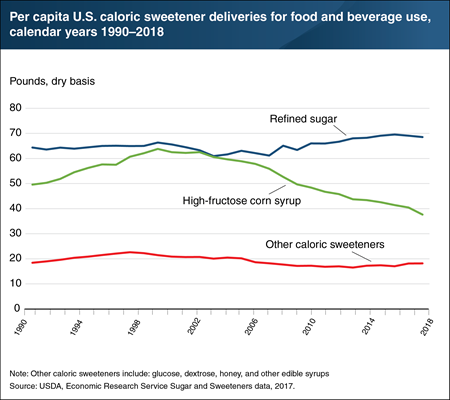 Total caloric sweetener deliveries in 2018 totaled over 40.7 billion pounds on a dry weight basis (water content removed), down 2 percent from 2017. This translates to 124.4 pounds per person, a 2.6-percent decline from the previous year. Refined sugar continues to make up an increasing share of per capita deliveries, while corn-based sweeteners, particularly high-fructose corn syrup (HFCS), have trended downward since the early 2000s. On a per-person basis, deliveries of HFCS have fallen 40 percent since 2000, while refined sugar increased by 5 percent over the same period. This period coincided with various occurrences—higher input prices from global commodity price spikes; the growth of corn-based domestic ethanol production; increased imports of sugar supplies from Mexico; and greater attention to food labels by food manufacturers and consumers. However, per capita refined-sugar deliveries have declined slightly since 2016, suggesting a broader decline in caloric sweetener demand. Other caloric sweeteners, such as the corn sweeteners dextrose and glucose, and other sweeteners like honey, maple syrup, molasses syrups, and fructose syrups, make up a relatively minor share of total deliveries. This chart appears in the ERS Sugar and Sweeteners Outlook newsletter released in August 2017.