Most corn production in U.S. and Mexico is geographically concentrated 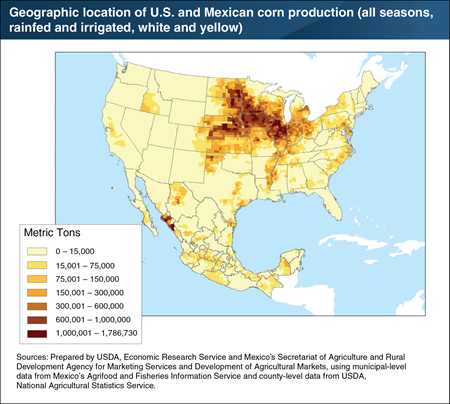 As the leading crop produced by both Mexico and the United States, corn is grown in many parts of each country, but cultivation is concentrated in areas best suited to corn production. In the United States, corn is cultivated primarily in the country’s Midwestern States, stretching from Nebraska to Ohio, a region dubbed the “Corn Belt.” Nearly 80 percent of U.S. corn area is rainfed, with irrigated production occupying much of corn-growing areas in Nebraska, Colorado, Kansas, and Texas. The largest quantities of production occur in Iowa, Illinois, Nebraska, and Minnesota, States that also lead in yields. U.S. corn production is almost exclusively of the yellow corn variety, with the majority used for purposes other than human consumption (e.g. feed, ethanol). In contrast, Mexico produces mainly white corn, and a greater share of Mexican corn than U.S. corn is used for food. Although white corn is grown in all of Mexico’s 32 States, 10 States account for 84 percent of production, and two States (Sinaloa and Jalisco) account for over one-third. This chart appears in the ERS report, The Growing Corn Economies of Mexico and the United States, released in July 2019.