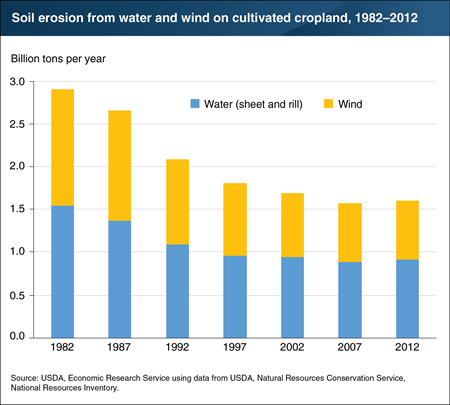 As farmers have adopted soil health and conservation practices like conservation tillage, they have helped reduce soil erosion on the Nation’s working lands. Data from USDA’s National Resources Inventory (NRI) show erosion on cultivated cropland due to water and wind has declined by 45 percent, from 2.9 billion tons in 1982 to 1.6 billion tons in 2012. Though part of this decline is due to less land being cropped over time, a larger portion is due to changes in farm management practices. Reducing erosion is an important first step toward improving soil health, which can increase yields in crop and forage production. Healthy soil also has a positive impact on water quality, decreasing nutrient runoff into streams and rivers. In addition, healthier soil tends to have a greater ability to hold water, which can give crops greater drought resilience. This chart appears in the May 2019 ERS report, Agricultural Resources and Environmental Indicators, 2019. It is also in the August 2019 Amber Waves feature, “Conservation Trends in Agriculture Reflect Policy, Technology, and Other Factors.”