ICYMI... Smaller farms often rely on the principal operators and their spouses for labor, while larger farms rely on hired labor 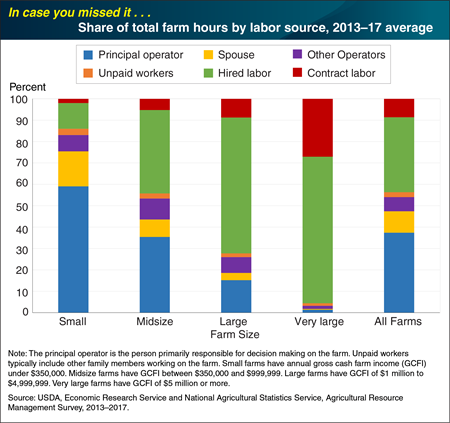 Farms of different sizes rely on different mixes of labor. During the 5 years encompassing 2013–2017, the principal operator and the operator’s spouse provided most of the labor hours (75 percent) used on small farms—those with annual gross cash farm income (GCFI) under $350,000. That share fell to 44 percent on midsize farms (GCFI between $350,000 and $999,999), 19 percent on large farms (GCFI between $1 million and $4,999,999), and 2 percent on very large farms (GCFI of $5 million or more). Large and very large farms relied most on hired labor, which provided 64 and 69 percent of the labor hours on those farms, respectively. By comparison, hired labor provided about 12 percent of labor hours on small farms and 39 percent on midsize farms. Small and midsized farms are more numerous, but account for less production overall. Overall, principal operators and their spouses provided 47 percent of the labor hours used on U.S. farms in 2013–17, while hired labor provided 35 percent, and other operators and other unpaid family labor provided another 9 percent of total hours, the same share as contract labor (workers employed by firms hired by the farm). Contract laborers were particularly important on very large farms, contributing over 27 percent of labor hours. This chart updates data found in the March 2018 ERS report, Three Decades of Consolidation in U.S. Agriculture. This Chart of Note was originally published April 15, 2019.