ICYMI... U.S. inventory of table-egg laying hens grew to its highest levels ever in 2018 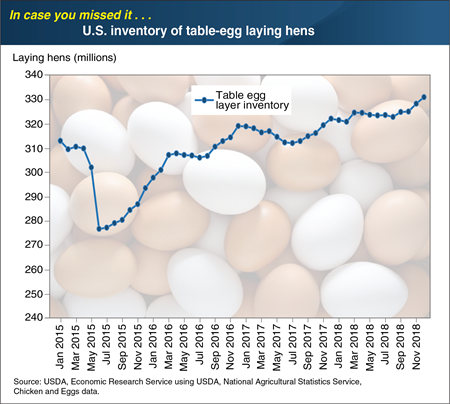 The United States produces close to 7.9 billion dozen table eggs per year, via a population of table-egg-laying hens numbering in the hundreds of million. Once trade and storage are accounted for, this amounts to nearly 279 eggs available per person annually. In 2015, an outbreak of Highly Pathogenic Avian Influenza (HPAI) significantly reduced the Nation’s laying-hen inventories. After reaching a low point in June 2015, inventories began to recover and have since eclipsed previous record highs, reaching nearly 331 million in December 2018. Along with the rise in laying-hen numbers, egg-laying rates have also increased through genetic improvements, reaching over 79 eggs laid per 100 hens per day in December 2018. Currently, the capacity for daily production exceeds approximately 22 million dozen eggs. In 2019, USDA forecasts suggest egg production will reach 8 billion dozen with a domestic availability of 280 eggs per person. A version of this chart appears in the ERS Livestock, Dairy, and Poultry Outlook newsletter released in February 2019. This Chart of Note was originally published February 27, 2019.