ICYMI... Rice producers in the southern United States increased adoption of hybrid and herbicide-tolerant seed varieties between 2006 and 2013 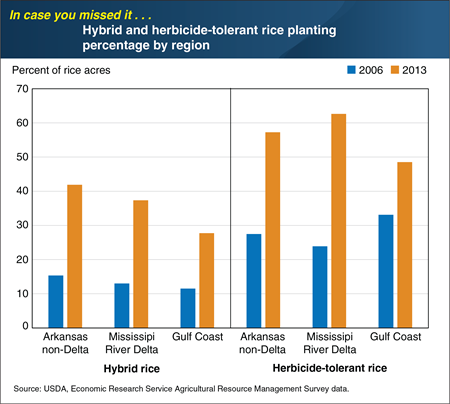 Data from USDA’s Agricultural Resource Management Survey of U.S. rice farms indicate that southern rice producers increased the planting of both hybrid and herbicide-tolerant seed between 2006 and 2013. Hybrid rice gained favor primarily because it is higher yielding than conventional rice. From 2006 to 2013, hybrid rice acreage increased in all major southern rice-producing regions. Herbicide-tolerant rice is bred to withstand applications of specific herbicides that kill targeted weeds, particularly “red rice” in the South. This feature allows producers to apply herbicides after both the rice and weeds have emerged, killing targeted weeds without harming the rice. Unlike other herbicide-tolerant crops, herbicide-tolerant rice varieties have been developed through traditional plant-breeding methods rather than genetic modification. From 2006 to 2013, herbicide-tolerant rice acreage increased from 27 to 57 percent of acres in the Arkansas Non-Delta, from 24 to 63 percent of acres in the Mississippi River Delta, and from 33 to 49 percent of acres in the Gulf Coast. These data appear in the ERS report, U.S. Rice Production in the New Millennium: Changes in Structure, Practices, and Costs. This Chart of Note was originally published December 10, 2018.