Record rice stocks are projected to continue, with China responsible for 68 percent of global levels 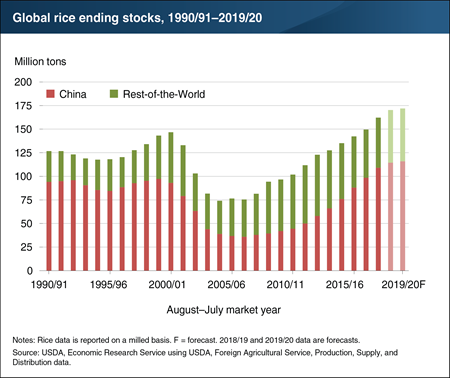 Global ending stocks of rice are projected to reach 171.9 million tons in the 2019/20 marketing year (August–July), the highest on record and the 13th consecutive year of expansion. The phrase “ending stocks” refers to the amount of a given commodity held in storage at the end of a marketing year rather than being consumed domestically or exported. High ending stocks put downward pressure on prices because they are carried over from year to year, inflating potential supply levels beyond what is produced in a given year. China accounts for the bulk of the increase in global stocks since the mid-2000s, with China’s 2019/20 ending stocks projected at a record 116 million tons or almost 68 percent of global ending stocks. China’s substantial stocks build-up since 2007/08 is largely due to producer-support programs that purchased rice from farmers at prices above market levels. In contrast to China’s rising stocks, rice stocks held outside of China in 2019/20 are projected at 55.9 million tons, virtually unchanged from a year earlier and nearly equal to the 2007/08-2018/19 average. This chart is drawn from data discussed in the ERS Rice Outlook report and appears in the ERS Rice Chart Gallery, updated in July 2019.