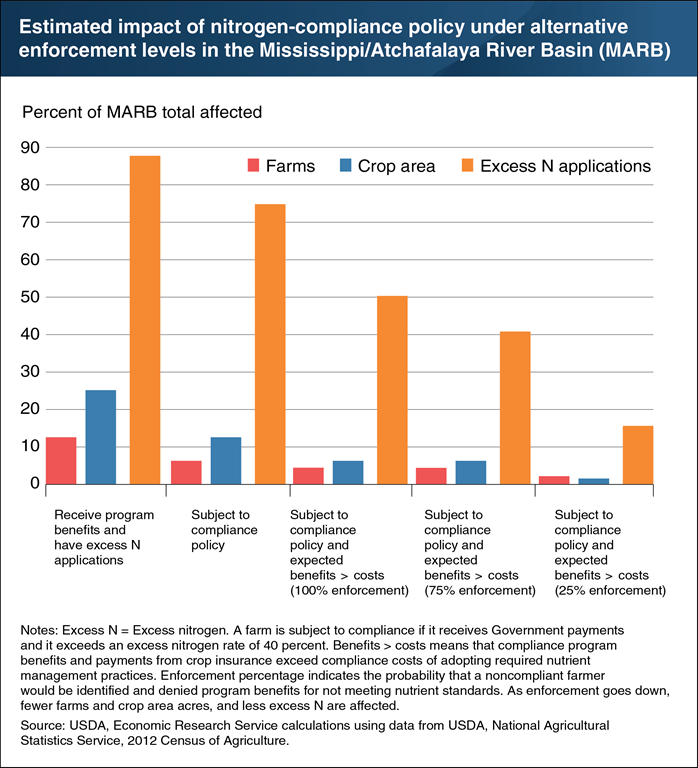 Excess nitrogen runoff from agriculture into the northern Gulf of Mexico is a major contributor to zones of reduced oxygen that pose seasonal dangers to aquatic life and fishing stocks. ERS has studied potential regulatory tools that could provide incentives to adopt nutrient-reducing management practices, such as requiring conservation compliance to qualify for USDA farm program benefits. ERS researchers explored the scope and effectiveness of a hypothetical “nutrient compliance” policy requiring farmers who receive Federal farm program benefits (including conservation and commodity program payments) to limit excess nitrogen fertilizer applications on land within the Mississippi/Atchafalaya River Basin (MARB). The researchers estimated that 14.4 percent of farms in the MARB, controlling 25.1 percent of cropland, apply nitrogen in excess of crop needs and receive program benefits—but that these farms contribute 88.1 percent of all excess nitrogen applications in the MARB. The analysis suggests that 8.7 percent of MARB farms would be affected by a compliance policy that disallows application of nutrients at levels greater than 40 percent above crop needs. Both the expected compliance benefits to farmers and hence the effectiveness of the nutrient compliance policy are influenced by the chance of being found out-of-compliance through inspection and enforcement. It was found that as enforcement goes down, fewer farms and crop area acres, and less excess nitrogen are affected. For example, assuming 100-percent enforcement, the analysis suggests that 71 percent of affected farms would have an incentive to comply (because program benefits exceed nutrient management costs). With an enforcement rate of 25 percent, by comparison, the share of farms estimated to comply falls to 31 percent of those affected by compliance (or 2.7 percent of all farms in the MARB), and the share of excess nutrients that would be controlled falls to 15.7 percent. This chart appears in the ERS report Reducing Nutrient Losses From Cropland in the Mississippi/Atchafalaya River Basin: Cost Efficiency and Regional Distribution, released September 2018.