U.S. exports to Mexico of corn and corn-based products have increased since the end of NAFTA’s transition to free trade 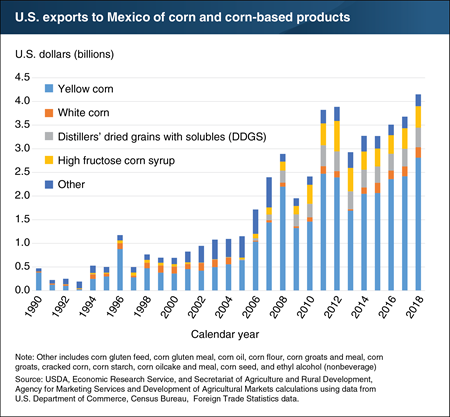 The North American Free Trade Agreement (NAFTA), which entered into force in 1994, significantly affected the U.S.-Mexico corn trade. From 1994 to 2007, the agreement permitted Mexico to regulate U.S. access to its corn market via a tariff-rate quota (TRQ). While these TRQs aimed to assist Mexico’s domestic producers as they adjusted to international markets, they also constrained the country’s ability to satisfy its growing demand for corn through the importation of yellow corn. Consequently, the Mexican Government opted to pursue a more liberal trade policy toward corn than that which NAFTA outlined, particularly during the later years of the transition to free trade. As a result, U.S. corn entered Mexico relatively freely during this period. Beginning in 2008, NAFTA lifted all formal restrictions, allowing U.S. corn to enter Mexico free of all tariffs and quotas. Since then, the annual value of U.S. exports to Mexico of corn and corn-based products has increased by about $1.8 billion in nominal terms since 2007. During the period 2016-18, the United States sold an annual average of 15.1 million metric tons of corn to Mexico, valued at about $2.8 billion, with additional corn-related products adding around another $1 billion. This chart appears in the ERS report, “The Growing Corn Economies of Mexico and the United States,” released in July 2019.