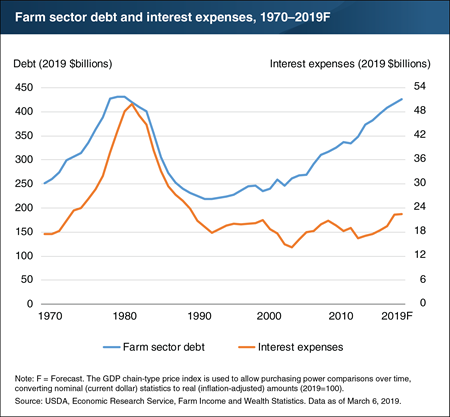 Farm sector debt has reached levels near the peak levels of the late 1970s and early 1980s. High levels of debt increase a farm’s risk of going out of business. From 1993 to 2017, real (inflation-adjusted) farm debt increased by 87 percent, or 4 percent per year on average. ERS forecasts farm debt to increase 2 percent in both 2018 and 2019. When adjusted for inflation, total farm sector debt in 2019 is forecast to be 4 percent ($4 billion) below the peak reached in 1980. Interest paid on farm debt remained relatively stable from 1990 through 2013, as interest rates declined. However, interest expenses in 2019 are forecast to increase 38 percent ($6 billion) compared to 2013. Interest expenses in 2019 are forecast to be 18 percent above the 30-year average, 19 percent above the 10-year average, but 55 percent below the peak in 1982. This chart updates data found in the July 2018 Amber Waves feature, “Current Indicators of Farm Sector Financial Health.” Find additional information and analysis on ERS’s Farm Sector Income and Finances topic page.